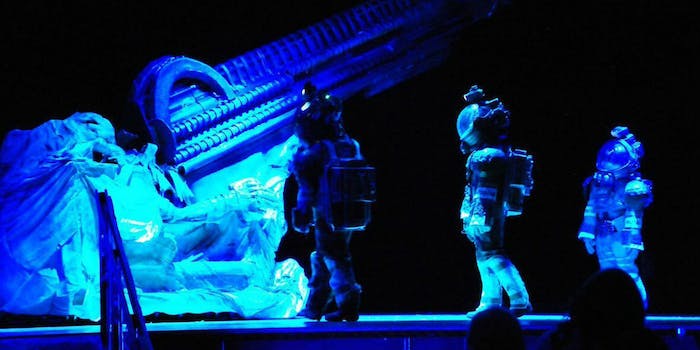 As terrifying as it is impressive.

Remember those awesome pictures of a New Jersey high school putting on a stage play of Ridley Scott’s 1979 film Alien? Yeah, the chest-burster one.

Well, good news! You can now watch the entire stage play on YouTube, including a special introduction from actress Sigourney Weaver herself, who played the heroine Ellen Ripley.

Weaver’s introduction happens at about the four-minute mark, in which she names and thanks the teachers involved with putting on the special encore edition of the show. The video itself was filmed by a member of the audience, so it’s not exactly a professional recording, but it does the trick and lets you see how the crew translated the slow-burn horror film into something appropriate for a low-budget theater production.

Seeing it all in motion, it’s stunning how well they capture the feel of the original Alien film. One of my favorite bits is when the actor playing Brett is searching for Jones the cat in a storage room. In the film, the alien appears and seems to strangle and maul Brett offscreen while Jones watches. For the stage play, they have the Alien yank Brett through a vent. Also, kudos to whoever plays the alien, because they clearly lift.

Sigourney Weaver visiting the NBHS cast and crew at their encore performance of Alien after national media recognition was unbelievable!! #alien #Alien40th pic.twitter.com/2UXL0v1H3X