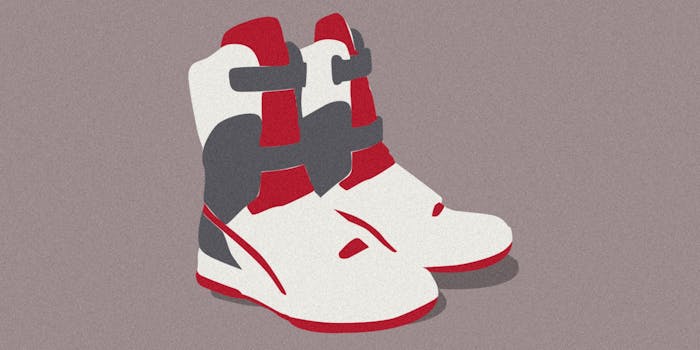 Fans were thrilled when Reebok announced last month that it would celebrate the newly created Alien Day by selling the iconic “Alien Stomper” boots that Sigourney Weaver wore in Aliens—even though most saw through the made-up holiday as a blatant ploy to sell merchandise. But as is the case with many nostalgia-driven sales, like Pepsi Perfect last October, things didn’t go as planned.

The shoes were set to go on sale April 26 at 12pm ET, costing fans a cool $174.99 with the option to purchase Ripley’s high-top shoes or the mid-cut version Bishop wore in the movie. However, the numbers were limited: only 426 pairs of Ripley’s shoes (referring to LV-426, the planet in Alien) and 1,986 pairs of Bishop’s shoes (the year Aliens was released) would be available. If you’re in the U.S., that number went down significantly.

Even if you didn’t know just how few pairs of shoes would be up for grabs, it was probably fair to assume Reebok’s website wouldn’t hold up to the traffic once the gates opened—despite Reebok having nearly a month to prepare for legions of collectors and fans.

@nicekittieBKN @pete_poulos @Reebok I've been trying for twenty minutes. My chest might burst.

oh lord help me @reebok they are in my cart BUT I CAN'T CHECKOUT WHYYYYY pic.twitter.com/9baUmKO5Ay

hey @Reebok fix your damn website so I can checkout! you had MONTHS to prepare for this…

But fans soon noticed an entirely different problem. When they clicked on the link to purchase Ripley’s Alien Stompers, they discovered the shoes—ones that a female character wore in a blockbuster so successful that there’s a fake holiday around it—were only available in men’s sizes.

Generally speaking, you can convert to a women’s shoe size by stepping down a men’s shoe size by two, although that’s not always a guaranteed fit. According to screenshots of the Ripley’s Alien Stompers product page, the smallest available size was a men’s 8, which would be approximately a women’s 10. That already leaves out many of the women who may have wanted to purchase and wear those shoes.

Many fans didn’t miss the irony that shoes originally worn by an iconic female hero weren’t made available to women.

Alien Stompers are finally on sale, but only MEN's sizes. Shoes originally worn by a woman. Awesome. #reebok #AlienStomper

Even the smallest size, Men's 6, would be 2 sizes too big for me. What makes @Reebok think women don't want to wear Ripley's shoes??

I feel like @Reebok only releasing 426 of the Alien Stomper sneakers is a giant middle finger to the fans that won't get them.

Wait, @Reebok created running shoes from Aliens that Ripley wore, but only released them in men's sizes? Ripley wore them. Female Ripley.

Very Dumb and Disingenuous for @ReebokClassics to release Ripley's shoes #AlienStomper in only men's sizes. https://t.co/WckAhpwWVt

The Daily Dot reached out to Reebok for comment, but did not get a response. A Reebok representative told i09 that “The Alien Stompers were released in men’s sizes due to retail demand.”

The Alien Stompers are, unsurprisingly, already sold out, but you can still bid on a pair being given away for charity.

Update 10:06pm CT, April 26: Reebok provided i09 with an updated statement, claiming the representative who originally spoke to the site wasn’t authorized to do so. According to the statement, “The Alien Stomper was mis-categorized on our US website as a men’s shoe. While size availability varied by market, the Alien Stomper is a unisex style and was produced in sizes (US Men’s) 3.5 – 12, which is a typical size range for a unisex model.”