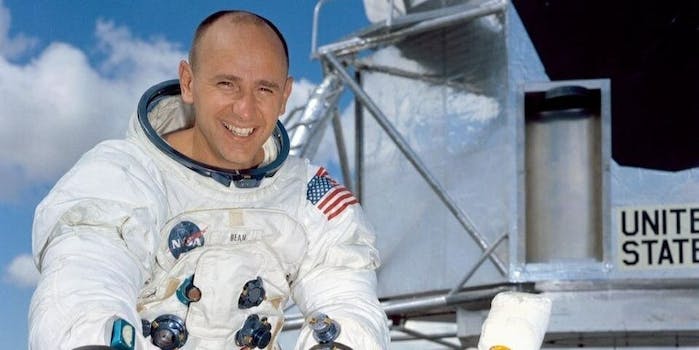 Alan Bean, the fourth man to walk on the moon, dies

'As all great explorers are, Alan was a boundary pusher.'

Alan Bean, the fourth man to walk on the moon, has died at the age of 86, according to NASA.

Bean, who was an Apollo 12 astronaut, was one of 12 men to walk on the moon, and his death comes only four months after fellow moon-walker John Young died. There are now only four men alive who have ever been on the moon, Edwin “Buzz” Aldrin, David Scott, Charles Duke, Jr., and Harrison “Jack” Schmitt.

We will remember Alan Bean fondly as the great explorer who reached out to embrace the universe, says our administrator @JimBridenstine. More: https://t.co/xl9NUzVfOC. pic.twitter.com/Uhj5ZykpjS

“Alan Bean once said ‘I have the nicest life in the world.’ It’s a comforting sentiment to recall as we mourn his passing,” NASA Administrator Jim Bridenstine said in a press release. “As all great explorers are, Alan was a boundary pusher. Rather than accepting the limits of technology, science, and even imagination, he sought to advance those lines—in all his life’s endeavors.”

According to NASA, Bean was commissioned as a U.S. Navy pilot in 1955, and he joined NASA’s astronaut corps in 1963. Six years later, he piloted the lunar module for the Apollo 12 mission and followed Pete Conrad onto the surface of the moon. Four years later, Bean commanded the Skylab Mission II, and he spent a then-record 59 days in flight while traveling 24.4 million miles.

After retiring from NASA, he became an artist. As NASA noted in its release, “He devoted his time to creating an artistic record of humanity’s first exploration of another world. His Apollo-themed paintings featured canvases textured with lunar boot prints and were made using acrylics embedded with small pieces of his moon dust-stained mission patches.”

Rest in peace Alan Bean. My we all paint you a beautiful tribute. #Artist #Astronaut. pic.twitter.com/LyeCDxPtBH

Said Bridenstine: “After logging 1,671 hours and 45 minutes in space, Alan passed the baton to the next generation of astronauts and changed fronts, looking to push the boundaries of his own imagination and ability as an artist. Even in this endeavor, his passion for space exploration dominated, as depicted most powerfully is his work ‘Hello Universe.’ We will remember him fondly as the great explorer who reached out to embrace the universe.”