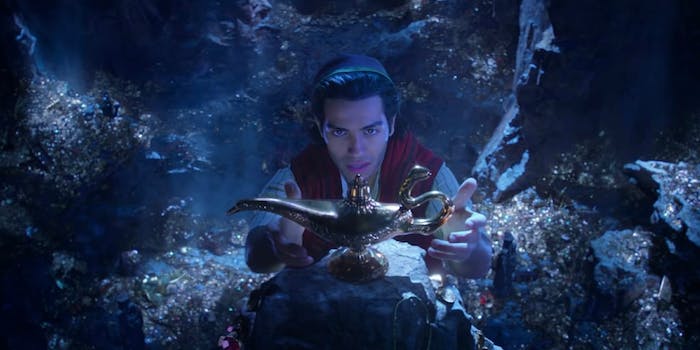 The character doesn't wear one in the original.

The first teaser trailer for Disney’s live-action remake of Aladdin arrived online last night, which offered plenty of wonder surrounding the Cave of Wonders, but for some fans, there was one thing off about it.

Sure, the trailer introduced the grand scope of Agrabah, showed us Jafar’s parrot Iago, took us into the cave where Aladdin discovers the Genie’s lamp, and it gave us gorgeous instrumental renditions of “Arabian Nights” and “Friend Like Me.” After the title card, we also got our first glimpse of Aladdin—who is portrayed by Mena Massoud—as he’s reaching out to grab the lamp that’s holding the Genie captive inside.

The live-action Aladdin has the hair, the vest, and the fez that the animated version of him donned, and while the rock where the Genie’s lamp resides blocks our view, we imagine the pants are similar, too. But this version of Aladdin has one thing the animated version does not: a white striped shirt that either falls short of his forearms or is rolled up to appear that way.

Aladdin has plenty of spectacle, a magic carpet, fantastical elements, and a Genie that can grant three wishes (and only three wishes) as long as you don’t ask the Genie to kill someone, make someone fall in love, or bring someone back from the dead. But Aladdin wearing a shirt underneath his vest inside of a cave? That’s a bridge too far.

The pushback, which is definitely on the sillier side when it comes to first impressions of a live-action remake of a beloved animated property, comes in two-fold. For one, there are the fans who really wanted to see Aladdin as he was depicted in the 1992 film. And that means an Aladdin wearing a fez, patched up pants, and a vest—and no shirt. There’s even a bit of criticism that Aladdin looks too perfect.

My god do I have to spell it out Aladdin DOESN'T WEAR ANYTHING UNDER HIS VEST THIS IS CANON COME ON PEOPLE. pic.twitter.com/EaPs2rZISf

I’m still mad they put a shirt on under Aladdin’s vest. It feels like a direct attack.

My favorite comment thus far on the live action Aladdin trailer: “He has a shirt on under the vest. Literally unwatchable.”

the new #Aladdin trailer features Aladdin with a shirt under his iconic vest…?

nope. that’s not my Aladdin pic.twitter.com/H4eTlfI5Wx

The other speaks to how the film was drawn. Despite Aladdin not wearing a shirt for much of the movie, the character doesn’t have any nipples. See exhibit A.

It seems to be something of an isolated incident among other Disney films—and even within Aladdin itself—but for some viewers, it’s something they didn’t pick up on until they were much older.

I've waited 26 years to see Aladdin's nipples and they do this to us. https://t.co/KOFXyIHS7Z

My Aladdin wears no shirt under his vest and has no nipples. #myaladdin

The teaser trailer has about 90 seconds of footage and little context, so we don’t know if the shirt will be a permanent part of Aladdin’s look or something he’s only donning when he visits the Cave of Wonders. But logistically, it makes sense for him to have a shirt to cover himself up.

Aladdin is heading into the Cave of Wonders, which is located in the middle of the desert (and far from the fictional kingdom of Agrabah) late at night. Deserts typically have low humidity (and little water vapor in the air), so while daytime temperatures may rise above 100 degrees Fahrenheit, there’s little keeping the tempera. For example, temperatures in the Arizona desert can fall below 40 degrees Fahrenheit at night while in the Sahara, temperatures can drop to below 0 degrees Celcius (32 degrees Fahrenheit).

And sure, Aladdin is just a movie and it might not take the reality of desert temperatures into consideration. But by the time Jafar transports Aladdin to “the ends of the earth,” we might be grateful that Aladdin has a shirt to help counter the frozen tundra he’s banished to, even if that wouldn’t help him survive long, either.