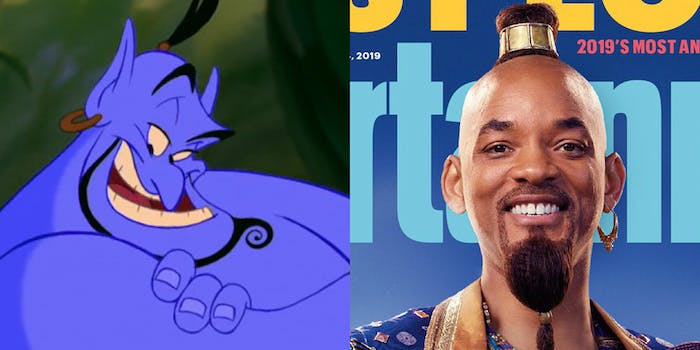 He looks quite different than he does in the animated film.

When Disney released the Aladdin teaser trailer two months ago, some fans took issue with Aladdin wearing a shirt when his character doesn’t don one in the animated version. But now that we have a better idea of what the film will look like, that might be the least of fans’ problems.

The cast of Disney’s live-action remake of Aladdin appeared on the cover of Entertainment Weekly’s latest issue, giving us our biggest glimpse into how director Guy Ritchie will tackle the beloved film. But fans didn’t have to even click on the accompanying article before they discovered what will be one of the more polarizing aspects of the film.

A whole new world. Check out the exclusive first look at Disney’s #Aladdin on the cover of the newest issue of @EW! https://t.co/7xLw0ZDtJc pic.twitter.com/C50SvXwBVg

Any of the discourse surrounding Aladdin wearing a shirt from two months ago has nothing on Will Smith as the Genie.

Will Smith’s genie hair in the live-action #Aladdin is going to be a major source of anxiety for me in 2019. pic.twitter.com/FwG44LHiUj

*upon seeing Will Smith as Genie for the first time* #Aladdin pic.twitter.com/uLpMzwE38P

Smith is in the unenviable position of portraying the Genie, a character made instantly iconic by Robin Williams’ performance as well as a distinctive look. The Genie was larger than life and could transform himself to look like different people and creatures. With our first look at the Genie so far, he’s basically Smith with a fake ponytail and goatee that stand out much more than a lot of other fake hairpieces would on other characters.

According to Ritchie, the Genie in his film—who he described as “part Fresh Prince, part Hitch”—will have a blue form, although it’s one that isn’t finished yet.

“I wanted a muscular 1970s dad,” Ritchie explained. “He was big enough to feel like a force — not so muscular that he looked like he was counting his calories, but formidable enough to look like you knew when he was in the room.”

Smith also added that this wouldn’t be the only look we would see from the Genie. If he has one advantage over the original, he’ll be able to blend into a crowd more.

“I’m gonna be BLUE! :-)” he told one fan on Instagram. “This is how the Genie is in Human / DIsguise Form. My character will be CGI for most of the movie.”

But still, that didn’t stop people from having a bit of fun with the one version of the Genie that we do have by posting an assortment of memes and edits.

Now, this is a story all about how
My life got flipped-turned upside down
And I'd like to take a minute
Just sit right there
I'll tell you how I became the genie of a town called Agrabah pic.twitter.com/WZizYN4t3n

A splash of blue :) #Aladdin pic.twitter.com/n2rmaaUxy0

it's not too late to salvage this pic.twitter.com/wuh7b3IOMk