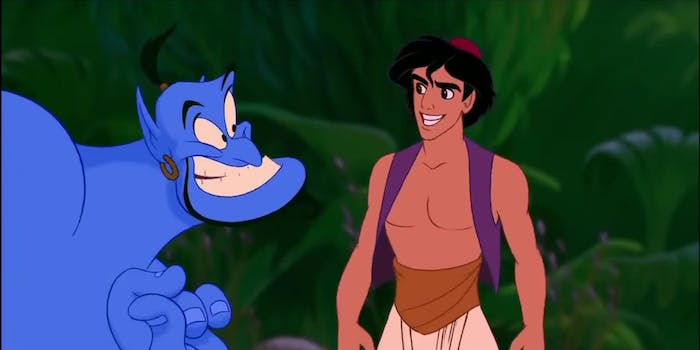 Wouldn't it be cool if all Disney films were conveniently and irrevocably connected?

In a perfect Disney world, everyone is related and all the stories are interconnected. Tarzan’s Jane is Beauty and The Beast’s granddaughter (which would explain why it’s so easy for her to understand the man of the jungle), while Tarzan himself is the younger brother of Frozen’s Elsa and Anna, whose parents fell victim to a shipwreck, later on frequented by a little mermaid.

Looking up Disney conspiracy theories online can be a hard black hole to get out of, but thanks to a couple of reliable sources who’ve personally worked on a few of our beloved films from childhood, we can finally set a few of our mind-boggling questions to rest.

Aladdin directors Ron Clements and John Musker spoke with E! News to mark the release of the iconic film’s Diamond Edition. They also took the opportunity to debunk a couple of myths popular among Disney diehards regarding the animated movies they worked on under the franchise.

On the subject of the movie being set in a post-apocalyptic future world, Musker clarifies that they merely intended for the movie to be set in Baghdad, Iraq. “We kept it Baghdad in our first treatment, and then the Gulf War happened—the first Gulf War,” he explained. When Roy Disney decided to nix the intended milieu, Musker took the letters of “Baghdad, Iraq,” mixed it up, and came up with “Agrabah,” the final setting that would end up in Aladdin’s final version.

There’s also a rumor that when Aladdin, dressed as a prince, comes to Jasmine’s balcony via magic carpet and is met by a ferocious Rajah, he mutters, “Good teenagers take off their clothes.”

Scott Weinger, who voiced Aladdin, vehemently denies saying the phrase. “Let me tell you, being in the recording studio with Robin Williams (who plays the Genie), wanting to do a good job and not blow it, there’s no way I would have made some dirty joke,” stated Weinger. “I feel bad being a myth buster, although it’s probably a good one to bust.”

According to Clements, they had plans for an ending that involved the peddler revealing himself as the Genie, but because of editing decisions, the revelation was left on the cutting room floor.

If you’re dying to find out if the ship Ariel explores in The Little Mermaid is the same one carrying Elsa and Anna’s parents to their doom in Frozen, prepare to be toyed with even further. While Musker agreed that the theory was fascinating, the consensus is, they’re not really sure. “You can talk to Chris Buck (Frozen co-director),” Musker mused.

It’s not a completely hopeless fantasy, though. Last year, Buck sort of confirmed that Tarzan is Elsa and Anna’s younger brother.

In the movie, while the nominal character was psyching himself up by climbing on trees and singing about going the distance, a purple shooting star darts across the screen.

Theorists immediately surmised that since the same team was behind Hercules and Aladdin, then it couldn’t be a star, but rather Aladdin and Jasmine taking a joy ride on a magic carpet while harmonizing to “A Whole New World.”

Nope! “The shooting star, we were thinking, is Pegasus,” Clements said of the assumption.

There you have it! While these answers can certainly assuage a portion of every Disney lover’s aching heart in the meantime, the jury is still out on whether The Evil Queen from Snow White is also Mother Gothel in Tangled or whether Boo from Monsters, Inc. is also the witch from Brave.