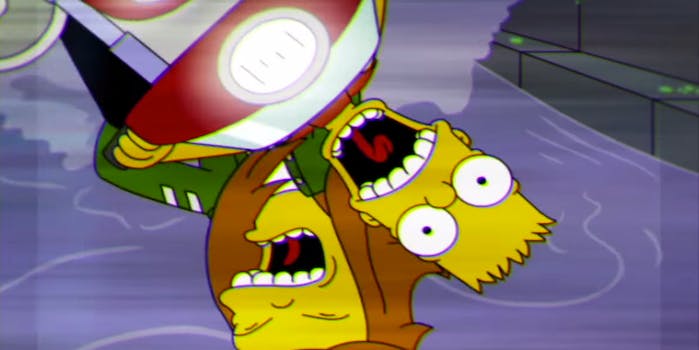 How far we’ve come. From a single Tumblr post two years ago to a fully realized animated trailer, Bartkira, the fan recreation of Akira featuring the Simpsons, has exceeded our wildest dreams.

Bartkira is the brainchild of Tumblr artist Ryan Humphrey, who drew fanart of Bart as the tormented Tetsuo, the film’s unfortunate villain. It quickly grew into a full-scale collective fanart project spearheaded by fellow Tumblr artist James Harvey, which reconfigured Bart as the titular main character and Millhouse as his unfortunate sidekick. Two years later, the Bartkira Project has a website with three volumes of a gorgeous manga-style webcomic, each featuring several-hundred pages by dozens of fanartists. And now it even has an animated trailer.

Like the manga, the trailer is a collective work—the idea of Kate Sullivan, an artist who crowdsourced a similar animated fan project for Sailor Moon last year. The Bartkira trailer utilizes the work of more than 50 animators, and the result is mesmerizing:

Here’s the original trailer for comparison.

To celebrate the release of the trailer and the series’ third volume, the Bartkira project is hosting a charity auction featuring prints from the comic.

Though sadly there’s no full-length feature film on the horizon, the project will continue releasing the Bartkira webcomic, with three volumes still to go.

We’re pretty sure the long-delayed U.S. remake of the iconic Japanese film won’t be half as good as this.