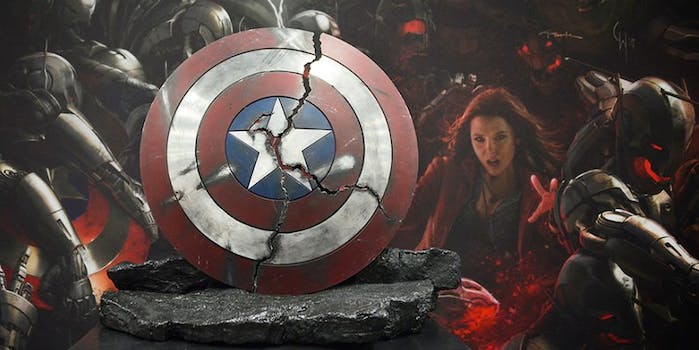 ‘Agents of S.H.I.E.L.D.’ will get ‘Age of Ultron’ exclusives in lieu of trailer

Marvel has a back up plan to get fans to watch Agents of S.H.I.E.L.D. for new Avengers footage.

Marvel’s first trailer for Avengers: Age of Ultron wasn’t just meant to advertise the movie, it was supposed to bring new audiences to Agents of S.H.I.E.L.D.

By airing the trailer during an ad break in Agents of S.H.I.E.L.D., Marvel were hoping that more people would tune into the show. Unfortunately the trailer leaked online first, so their next idea is to air an “exclusive piece” from the movie during this week’s episode.

Agents of S.H.I.E.L.D. isn’t in danger of cancellation quite yet, but its ratings could do with a boost. The show was criticized during its early episodes for for failing to live up to the rest of the Marvel Cinematic Universe, but it picked up considerably halfway through season 1. Its second season is receiving a far more positive response from fans and critics, and it would be a pity to see audiences lose interest now that it’s begun to fulfill its potential.

Since Age of Ultron doesn’t come out until May 2015, we doubt that Marvel’s upcoming Agents of S.H.I.E.L.D. exclusive will tell us much that we don’t already know. That won’t discourage people from tuning in, though. The trailer achieved a record 34.3 million views in its first 24 hours online, indicating that the public still has an insatiable appetite for all things Avengers.

Next week will see Marvel release another taste of Ultron-related content, this time in the middle of a Marvel Comics documentary in the Agents of S.H.I.E.L.D. time slot. It’s also promising a mysterious “much more,” which may be a sample of Ant-Man or (more likely) will be some kind of behind-the-scenes extra. To find out, you’ll have to tune into ABC at 9pm for the next two Tuesdays. Or wait the five minutes it takes for someone to post it online.