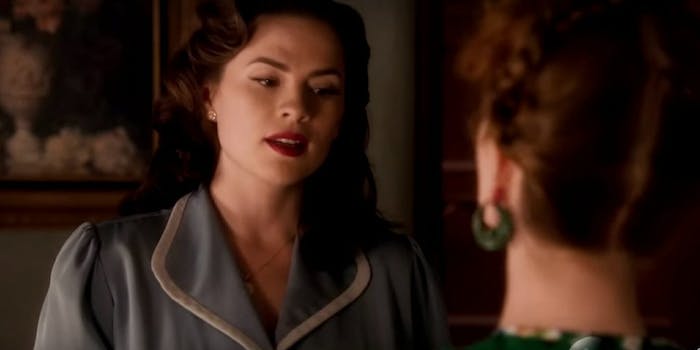 The latest Agent Carter trailer introduces a character fans have been waiting a year to meet: Ana Jarvis.

Ana is the wife of Peggy Carter’s sometime-sidekick Edwin Jarvis; she had a brief offscreen role in the show’s first season. Played by Dutch actress Lotte Verbeek, Ana shows up in the new teaser with a gun and matching holster. Could she be the new Q to Peggy Carter’s James Bond?

We learned last season that Ana met Jarvis while he was stationed in Budapest. They fell in love, but their lives became complicated when war broke out in Europe. Because Ana was Jewish, Jarvis hatched a plan to get her out of the country—but he had to forge her travel papers to do it.

This backstory is the closest thing Jarvis has to a dark past, because the forgery led to a treason charge. Thankfully Howard Stark was able to save Jarvis from a court-martial, and against all the odds, Ana and Jarvis lived happily ever after—aside from all the explosions and spy antics that began when Peggy Carter showed up, anyway.