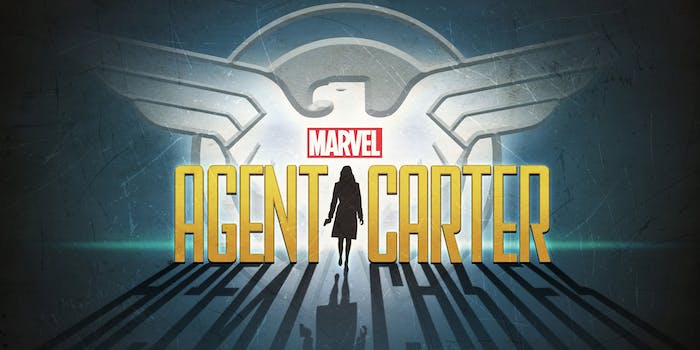 Just a few weeks after news broke that ABC was developing a second spinoff to its hit series Agents of S.H.I.E.L.D., the network caused mass celebration across Marvel fandom—by opting to renew Agent Carter instead.

The new spinoff would have starred Adrianne Palicki (Friday Night Lights) and Nick Blood (Babylon) in an expanded version of their current roles on S.H.I.E.L.D. Palicki and Blood would have basically headlined a small-screen version of Mr. and Mrs. Smith, as snarky, duplicitous agents who were once married. It would have continued the network’s trend of developing shows focusing on the normal, non-superpowered agents at the other end of Marvel’s Avengers franchise.

Fans of Adrianne Palicki now have the disappointment of losing yet another comic-book adaptation—Palicki helmed NBC’s failed Wonder Woman series.

Instead, ABC opted to support the staunchly feminist Agent Carter. For most of the series’ second half-season fans have been pushing #RenewAgentCarter, desperate to make sure that its modest 2.2 ratings didn’t kill one of the few superhero narratives starring a woman on a screen of any size. Fans were on pins and needles waiting for the renewal, and the fandom exploded into celebration upon last night’s late announcement.

So far, we’ve learned nothing new about a third reported “mystery” Marvel spinoff, scripted by Oscar-winning John Ridley. But Ridley is also creator of the anthology series American Crime, and since ABC just renewed that series for a second season as well, it’s probably unlikely he’ll be able to focus his attention toward developing the Marvel series, whatever it is.

Meanwhile, in the same breath that they celebrated Agent Carter‘s renewal, the fandom went on to ask that ABC fix the notable whiteness of the series’ first season:

SO excited #AgentCarter has been renewed!!! Is best show! Now can we please have more people of colour in #AgentCarterSeason2 ?? xxxxxx

happy about a second season of #AgentCarter but I really hope it fixes its unrelenting whiteness :x

What I want for s2 of #AgentCarter? For Peggy to go to bat for a Japanese-American female agent who isn't trusted by the men.

#AgentCarter is renewed! Please let us find out about Jim Morita, and Gabe Jones. Let us see Peggy shutting down bigotry and sexism. Please?

On Tumblr, user karnythia pointed out, in response to the usual inaccurate complaints that black and white integration hadn’t occurred yet, that the ’40s society in which Peggy Carter lived and worked was heavily integrated.

“There’s literally no canonical or historical reason to erase the diversity of New York City in Agent Carter,” she wrote.

But with the renewal of the first season already up in the air, it seems unlikely that ABC will rock the boat too much for the second season. Then again, ABC is the only network to gain viewership among young adults this season—and all of its top-ranked shows are notably diverse. Its multicultural hit Fresh Off The Boat just snagged a season 2 renewal, as well.

It’s clear that ABC respected the organized fan campaign on Peggy Carter’s behalf. With a switch to a push for increased representation, it’s possible Agent Carter’s second season might still become the female-driven, kickass, and diverse Marvel show of our dreams.

Photo via DisneyABC/Flickr (CC BY ND 2.0)