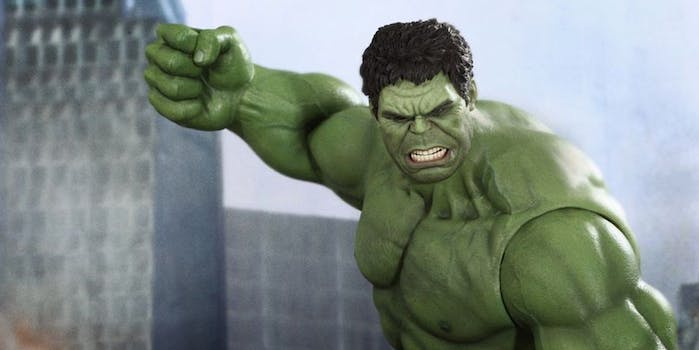 The trailer is getting an early release.

A week before Marvel was to debut the first official trailer for the Avengers sequel, Age of Ultron, MovieWeb has leaked the trailer online.

It’s a full-length trailer, clocking in at two minutes and 12 seconds of awesomeness. James Spader’s voiceover narration as Ultron fills us with excitement and anticipation. On a sliding scale of James Spader-induced excitement between Boston Legal James Spader and Secretary James Spader, this is a at least a Blacklist.

The gang’s all here, and everyone looks increasingly harried and war-weary, which lends itself to the theory that the Marvel Cinematic Universe is gearing up to adapt the famous Civil War arc from the comics for the silver screen. We aren’t prepared for that tearjerker. We also weren’t prepared for the terrifying creepy rendition of “I’ve Got No Strings” in the trailer. Like Pinocchio wasn’t creepy enough.

Still, though, this looks awesome. We can’t wait.

Update 8:34pm CT, Oct. 22: Looks like Marvel decided to pull the trigger after the leak. Here’s the official trailer.