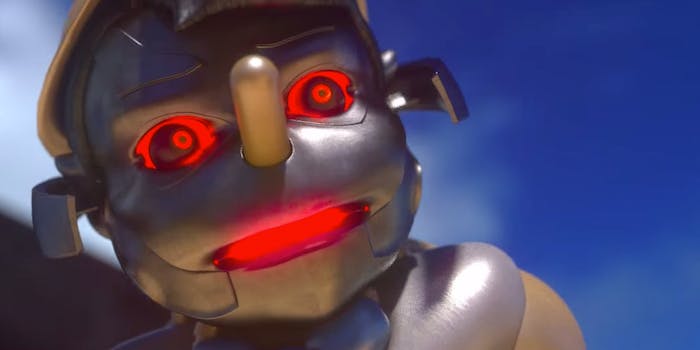 He's been waiting beneath that wooden mask for some time now.

You know, Ultron might be the real puppet in this after all.

The Internet has been in full freak-out mode ever since Marvel released the Age of Ultron trailer on Wednesday. The brand-new footage sparked breathless analysis, rampant headcanon, the sudden emergence of Utron fans, and widespread attention to that damn creepy rendition of “I’ve Got No Strings,” which may have already made Disney’s ownership of Marvel worth it.

One might think that the song is saying that the Avengers have no strings on Ultron. If this video is any indication, that’s a mistake, and Ultron has nothing to do with it. (Why would a robot quote a 74-year-old film?) No, this villain is much more sinister. He’s been biding his time behind a wooden frame for far too long, and he’s finally going to get his revenge. His lying nose is very much a weapon now.

Ever wonder what happened to Geppetto?

Justin Younger, who created “Ultronocchio,” shared what the rendered version of Pinocchio in Cinema 4D Studio looked like, and now we’re even more impressed and creeped out.