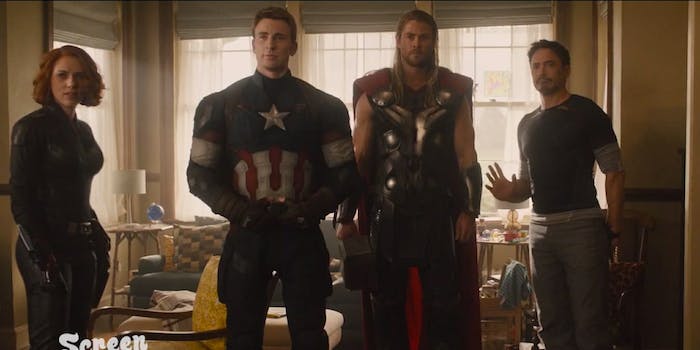 Plus a bonus blooper reel.

It’s time to laugh with, and then at, Age of Ultron.

The Ultron blooper reel and the Honest Trailer are both upon us, and the fanservice and snark, respectively, are predictably high.

First, Tony Stark, Thor, and the rest of the gang dance and smooch their way through the blooper reel funfest, which features lots of fake kisses between cast members and Thor and Vision halting the battle to lovingly embrace.

The cast deploys their fancy footwork in this @Avengers #AgeofUltron gag reel, out on Blu-ray October 2!https://t.co/uW7YJFO5sF

Now that you’ve enjoyed your look at the Avengers behind the scenes, it’s time to poke fun at the real deal.

At least the Honest Trailer is blunt about the challenges and pifalls of doing a sequel that also has to set up umpteen other movies in the Marvel Cinematic Universe.

Raise your hand if you bet Joss Whedon is wishing he’d capitalized on his geek clout to go revive Firefly.