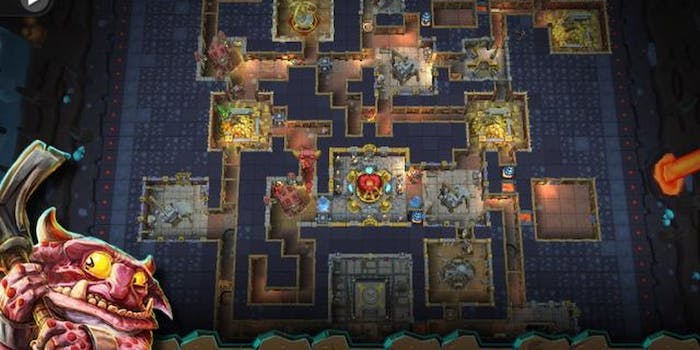 If you're going to advertise a game as 'free-to-play' in the U.K., there are paywall limitations.

In response to a complaint, the Advertising Standards Authority has ruled that Electronic Arts Ltd. may no longer advertise their free-to-play mobile game Dungeon Keeper as being actually free.

This judgment could have sweeping effects on the way free-to-play games as a whole are advertised in the U.K., in no small part due to the undefined parameters which Electronic Arts is cited as breaking by the rules.

The original Dungeon Keeper, released in 1997 by the famed development studio Bullfrog Productions, is a beloved classic. It was designed by Peter Molyneux, one of the most celebrated game developers in the industry.

The mobile version of Dungeon Keeper released in December, 2013, however, was generally regarded as a bastardization of the original game, in no small part for the way it punishingly locked game progress behind pay walls.

Locking progress behind pay walls is standard practice in free-to-play games on mobile platforms, or on social platforms like Facebook. The player may either wait for a cooldown timer to run out before they can take another action, or the player can use in-game currency purchased with real money to speed up the timer’s progress.

In the eyes of many critics, the mobile version of Dungeon Keeper crossed the line by making the game virtually unplayable without the expenditure of real world money, to purchase the in-game “gems” currency that could speed up progress.

The complaint which prompted the ASA ruling was issued in response to an email advertisement for the mobile version of Dungeon Keeper.

“GET DUNGEON KEEPER ON MOBILE FOR FREE! … DIG. DEVISE. DOMINATE. Build the most badass dungeon ever! Raise an army of diabolical minions and lay twisted traps to destroy any opponents foolish enough to set foot in your lair. MASTER THE HAND OF EVIL Cast powerful spells, pillage and plunder other players’ dungeons, and slap your imps around to make them work harder. A world of wicked fun is right at your fingertips. What are you waiting for, Keeper? Get it for FREE!”

The complainant, according to the ASA’s web page detailing the case and their ruling, “understood that gameplay was severely limited unless in-app purchases were made,” and “challenged whether the ad was misleading because it omitted significant information.”

The ruling, in summary, is based on the ASA’s findings that players of Dungeon Keeper would have to wait through significant delays before taking meaningful action, which would grow worse as the player progressed through the game, and that players would have to wait through countdown events “beyond that which would be reasonably expected by players.”

The question, then, is where the line is drawn? What length and frequency of countdowns could be reasonably expected by players of free-to-play games?

The Daily Dot reached out to the ASA for comment, but it has not yet responded. While acceptable remain unclear, advertisers of free-to-play games in the U.K. have effectively been put on notice to be careful stating how “free” their free-to-play game really is.