We can't wait to see Lupita Nyong'o's character on screen.

The first photo in the article shows Driver as the villain Kylo Ren, guarded by a pair of snowtroopers on a frozen planet. Ren was the black-clad figure with the crossguard lightsaber in the first teaser trailer for The Force Awakens, but until today, we didn’t know the man behind the mask.

Vanity Fair lists Kylo Ren as member of the First Order, an organization built from the remnants of the Galactic Empire. 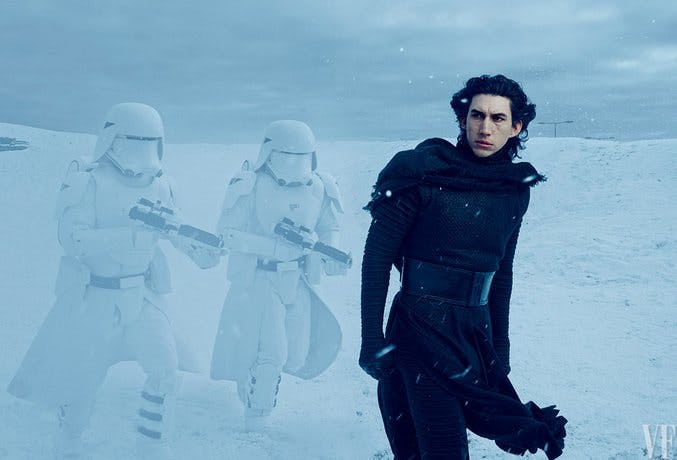 Nyong’o plays a space pirate named Maz Kanata, in a CGI role that required her to wear motion-capture dots on her face. Kanata is a more ambiguous figure than the blatantly evil Kylo Ren; she isn’t affiliated with either the First Order or the Resistance (the new version of the Rebel Alliance).

Oh, and she also has a castle full of pirates and smugglers, pictured here. This movie already sounds incredible.

More characters will be revealed in Vanity Fair’s full Star Wars photoshoot on May 12. In the meantime, you can get a sneak peek if you sign up for the magazine’s newsletter before 8pm EST today. Vanity Fair promises one more character reveal; we’re guessing it’s either a photo of Nyong’o as Maz Kanata, or Gwendoline Christie in her as-yet-unknown role.