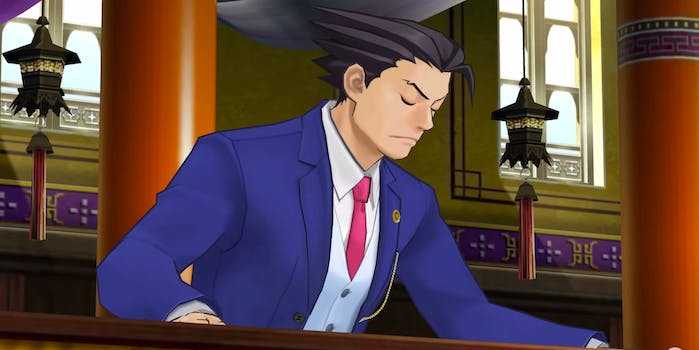 Loved Japanese game Ace Attorney is getting its own anime series

After 15 years, Phoenix Wright and Miles Edgeworth are finally transitioning from games to TV.

Any objections to the long-awaited anime adaptation of Ace Attorney have finally been overruled.

Ecstatic fans attending Tokyo Game Show earlier today learned that their dreams of seeing Phoenix Wright and his courtroom frenemy Miles Edgeworth appear in their own series are coming true: the anime will begin airing in Japan in April.

The gaming convention also premiered Ace Attorney 6, the latest game in the franchise, also due for release in 2016.

Ace Attorney debuted in 2001 and quickly gained popularity due to its cheeky courtroom shenanigans and lovable cast of characters. Despite spawning a worldwide fandom, a manga series, a stage play, several musicals, and a popular film adaptation from director Takashi Miike, it’s never gotten an anime series until now.

Here’s the promo for the new game, unveiled yesterday by Capcom:

There’s no word yet on whether the anime will follow the plot of the game franchise thus far or embark on something new, but fans are still overjoyed:

Redditors on r/anime were equally ecstatic. “My heart is about to implode from hype,” said one.

“I had to check 3 times that it wasn’t April 1st and even now I’m paranoid that this is someone out there pulling a fast one because it feels like I’m dreaming.”

Looks like fans can spend the next six months pinching themselves, because the Ace Attorney anime is actually reality.