Fans hoped this would be the spiritual successor to 'Journey,' but it falls short.

Ever since Abzu‘s announcement back in 2014, fans of the contemplative gaming genre have hoped the game would be the spiritual successor to Journey.

Created by Giant Squid and 505 Games and envisioned by Flower and Journey art director Matt Nava, Abzu certainly has the right pedigree to become a classic. It looks rich and gorgeous from its very first moments, inviting the player to experience a realm of great mystery beneath the ocean’s surface. The score was also written by Journey composer Austin Wintory, so fans of his work know that Abzu will offer an engaging and beautiful auditory experience as well.

When the game opens, you wake up floating on the surface of a great ocean. Clad in swimming gear, your character—never identified by name—dives beneath the surface to find a vast, stunning world lies in wait. Schools of fish dart past in rainbows of shimmering pinks and blues, seas of kelp sway lazily back and forth in the currents, and the shadow of the sun patterns the ocean floor like a dazzling kaleidoscope. One feels immediately placid entering Abzu‘s realms for the first time, reverent in the face of a world that is not our own. 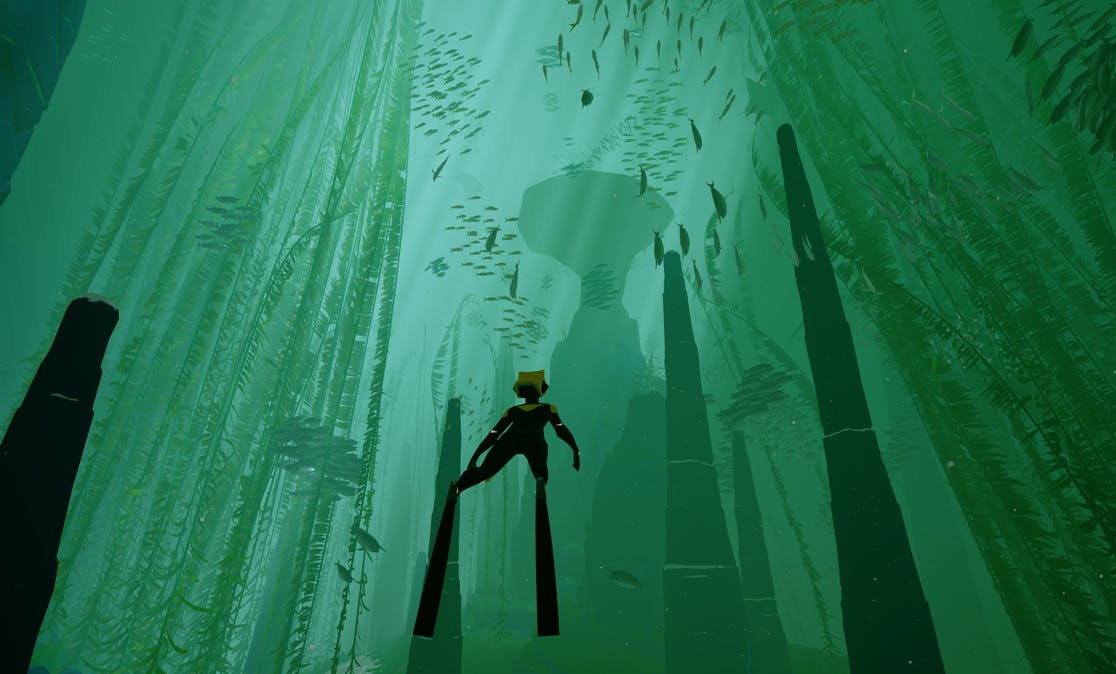 Abzu‘s control scheme is extremely simple, only using a few buttons to swim, speed up, and dive. On PS4, movement is controlled with the left stick, while the right allows you to look around you. It’s a fluid control scheme that works nicely with the setting, although curves and dives take a bit of getting used to. You’ll also notice that you even have the ability to send up a little psychic signal with the square button, which can be used to interact with certain objects you encounter along the way.

Sounds just like Journey, right? For better or for worse, that’s a thought that will follow you through the game. Abzu borrows so much from Journey that it feels less like an original creation and more like a really enthusiastic homage. You can ride on a fish, for example, and it reminds you of riding on the wind creatures in Journey. You can mediate on certain rocks on the ocean—just like you did in front of checkpoints in Journey. By the time you make it to the part where you’re finding hieroglyphics in an old cave, it feels cloyingly familiar. 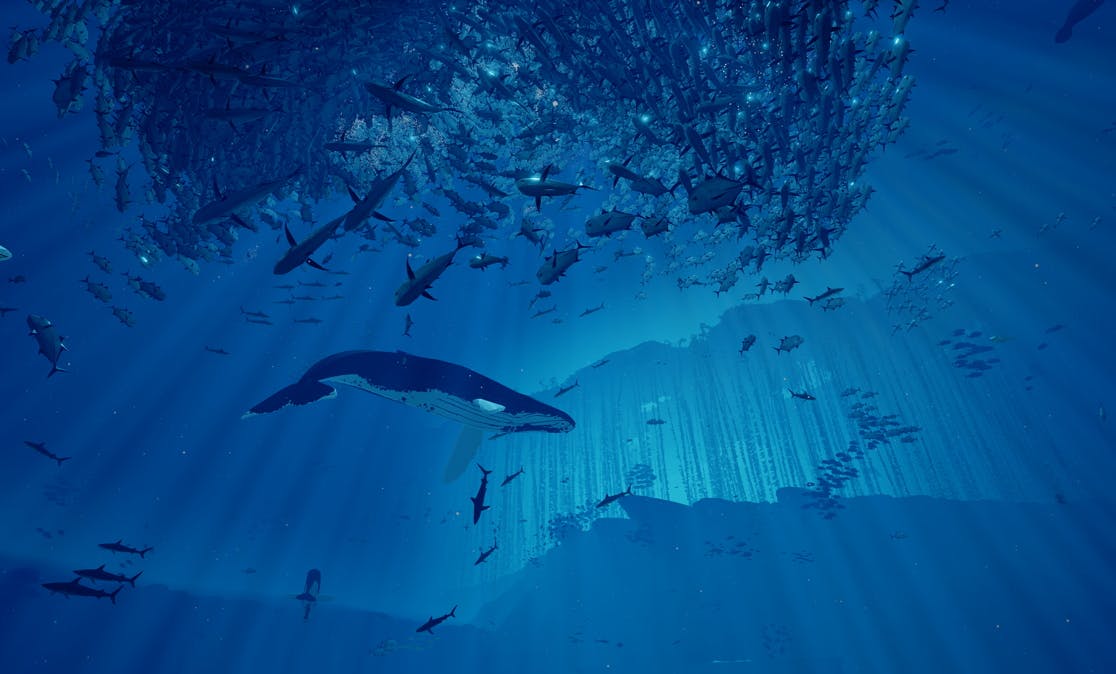 In the slivers of the game that are original, Abzu shines. When you choose to meditate, for example, you can watch your surroundings and learn about each species of fish you see. If you watch long enough, you’ll see predators go after prey, while other fish scramble to get out of the way. These are some of the game’s loveliest moments, just sitting still and watching the undersea kingdom go by.

Eventually, though, you have to get up and do more, and that’s where Abzu stumbles. The game seems to want you to explore, but its easy to get lost, and figuring out what to do next since is not always intuitive. There’s no apparent quest—so as far as we know we’re simply diving about. You find little glowing portals underwater that you can use your psychic ability to open to release fish from time to time, but there’s no way of knowing where they actually go or what releasing them means, if anything. Later actions you take in the game are equally mysterious. Abzu isn’t terribly long—we’re talking just a few hours—so playing it in one sitting is possible. You may find yourself feeling a bit bewildered as the game comes to a close. It’s a simply gorgeous place to be the entire time, but since it’s a game we find ourselves wanting some scrap of meaning, some indication that our role in the exploration was worthwhile.

Abzu is clearly a labor of love, but its heart is missing. It has all the trappings of a universe that we long to inhabit, which makes the lack of depth all the more bewildering. By introducing intriguing images and wonderfully strange encounters, we are invited into a fascinating world. The problem is that it’s never clear what we are there to accomplish. Plunging into Abzu is ideal if you’re there for the scenery, but not so much if you’re looking for more. 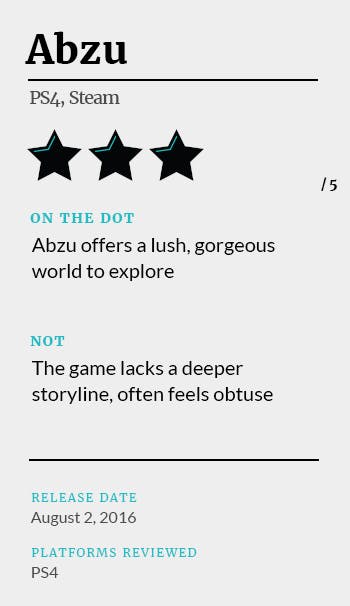