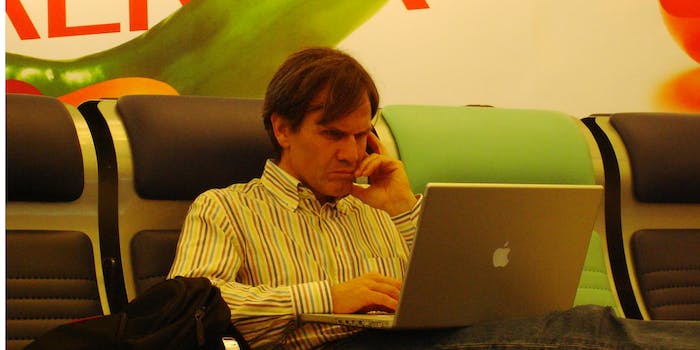 What would an Aaron Sorkin superhero movie look like? We may soon find out, because he’s in early talks with both Marvel and DC.

Sorkin let the news slip at CinemaCon this week, revealing that he’s meeting “with Marvel and DC.” It’s unclear whether he was referring to Marvel Studios itself, or one of the franchises at Sony or Fox.

“I have to go into these meetings and tell them as respectfully as I can that I’ve never read a comic,” he said.

This set comic book fandom ablaze with speculation, because you can imagine studios fighting hard to hire Sorkin. He’s a high-profile, Oscar-winning writer who adds real weight to a project. Although, of course, it’s hard to tell if he’s actually suited to the superhero genre. He usually writes dialogue-heavy dramas set in the real world, which is basically the opposite of a superhero blockbuster.

Sorkin’s Marvel/DC news also comes at a slightly awkward time. Just days ago, he claimed that he had no idea Hollywood has a discrimination problem. This quickly led people to dig up the many times he gave straightforwardly sexist statements in the press, reminding everyone that while Sorkin is beloved for creating The West Wing, he’s also a pretty controversial figure.

Comic book movies face mounting criticism for focusing on white men while sidelining women and minorities behind the scenes. In that context, many fans will be frustrated to see Aaron Sorkin—a writer with no personal interest in the genre–being courted by the biggest superhero franchises in Hollywood.