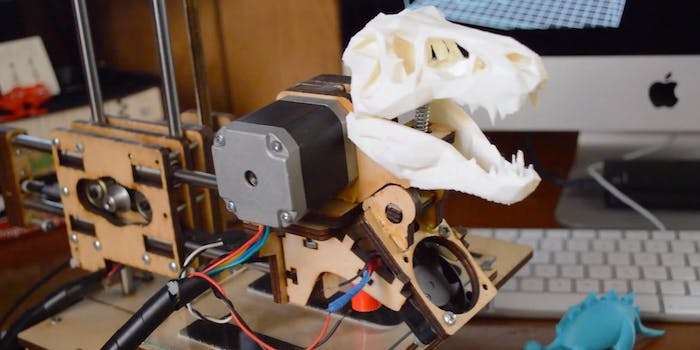 John Williams would most definitely slow clap this performance.

As we wait for the highly anticipated arrival of Jurassic World to roll into theaters with its Chris Pratt raptor squad, the original blockbuster is finding new life thanks to a 3D printer. No one’s printing dinosaurs, but John Williams’ classic theme song from Jurassic Park received a new sound when one creator decided to use his 3D printer as the instrument.

“Inspired by the old printer that played the E1M1 music from my favorite video game Doom, I decided to see how difficult it would be to get my 3D printer to do the same thing with the theme from Jurassic Park,” Andrew Sink wrote in a blog post.

Sink said “it wasn’t easy,” but he was able to find a MIDI file of the song online and then turn it into g-code.

“It took a few hours of tweaking, and I had to examine the MIDI file in Garageband to see what channel the melody was on. I isolated it and used the X and Y axes of the printer to play it,” he explained.

The result is a short rendition that does an impressive job of capturing the familiar notes of the theme.

You can download the g-code used by Sink here.