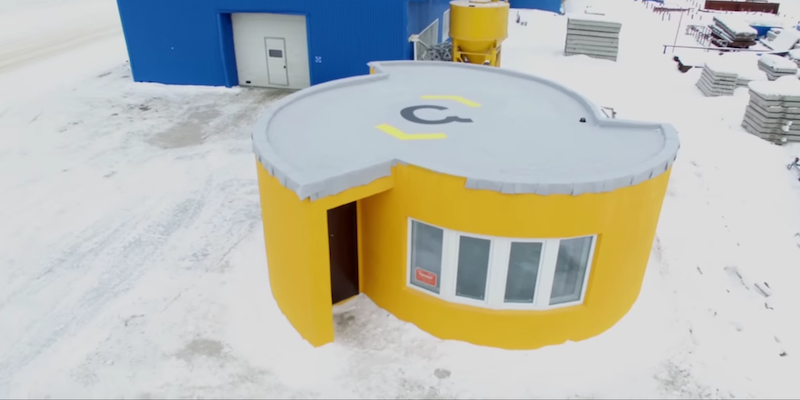 You won't believe how little it cost to make.

If any one area of construction innovation has proven itself exciting and hugely promising in recent years, it’s 3D printing. Since it first exploded into public view at the commercial and consumer levels, the various uses of 3D printing have grown in ways that would’ve been hard to imagine just 10 years ago. Whether it’s 3D-printed pharmaceutical drugs, heart valves, guns, or even cars, the potential applications are ever-expanding and moving into directions that seem increasingly able to provide some of the basic necessities of human life.

Case in point: A San Francisco-based business called Apis Cor has apparently taken a dramatic step forward that could have big implications for construction. The company released a video late last month showing the quick construction of a 3D-printed house, an entire livable home (albeit a small one) built over the course of a mere 24 hours.

Obviously, it’s a bit of a strange shape but not an unappealing one. If you’ve got a few minutes, the full video is pretty fascinating. It shows the construction of the test home, reportedly performed at a site in Russia, all in rapid time. When it’s all said and done, the fundamental components of the small, cute little house—the walls, the foundation, the floors, the doors, the windows, the insulation, and the roof—all for a cited price tag of just $10,134. Needless to say, that’s a very consumer-friendly price tag as far as places to live are concerned.

A quick coat of bright yellow paint completes the effect, although that’s one of the few parts that isn’t 3D printed. They took care of that the old-fashioned way, with some paint and some rollers. All in all, according to the video, the cozy domicile measures in at 38 square meters, or about 409 square feet. That’s more than large enough for one inhabitant, a snug fit for two, and likely getting a little too crowded beyond that by Western standards. However, given some decent interior decorating, who knows how spacious it could feel.