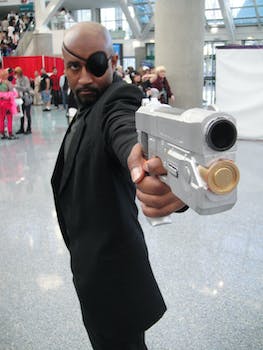 OK, how are there so many amazing cosplayers in the world!?

If you need something awesome to look at every single day this month, start with the #28DaysOfBlackCosplay hashtag.

As the title suggests, this hashtag celebrates black cosplayers from around the world, showing off all sorts of amazing home-made costumes from superheroes to Sailor Moon. The project was timed to tie in with Black History Month, and the hashtag is already filling up with plenty of incredible photos.

If this idea sounds familiar, you may have come across Cosplaying While Black, a Tumblr blog that aims to dispel racism in the cosplay community.

“A lot of people who think you need to have light skin to cosplay have a messed up definition of what cosplay is,” said the blog’s creator Chelsea Medua, when we interviewed her back in 2012. “These people think you need to look like a character right down to their weight, height, and skin color. The basic definition of cosplay it to just dress as a fictional or real character. Last time I check your skin, weight, and height weren’t fabric, so they have nothing to do with your costume.”

Well, these #28DaysOfBlackCosplay photos are certainly proving her point. Cosplay fans should keep checking in on this hashtag for the rest of the month.

Photo via Doug Kine/Wikimedia (CC BY 2.0)