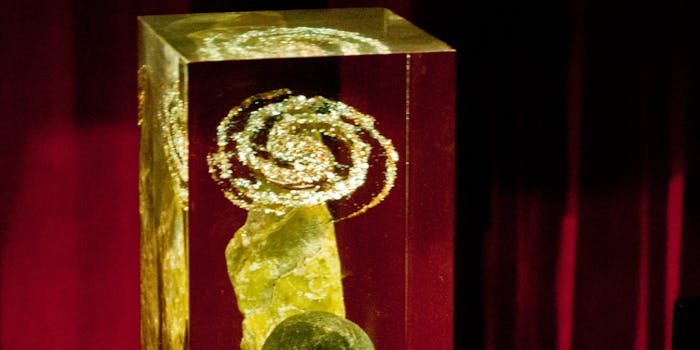 Nebula nominations forecast a change of culture in sci-fi community

Despite recent bouts over sexism in sci-fi, the 2013 Nebulas are a huge win.

Stop the presses, science fiction lovers, because you’ve never seen a Nebula nominees list that looks like this one.

If ever you needed encouragement that things in the publishing industry are changing in favor of opening the gates to a new, diverse generation of creators, the shortlist for the 2013 Nebulas is the sign you’ve been waiting for.

Among the many unconventional selections for this year’s nominees is writer Ann Leckie’s gender-challenging debut Ancillary Justice and two nominations for newcomer Sofia Samatar, for her novel A Stranger in Olondria and her short story, “Selkie Stories Are for Losers.” Women dominated the list of nominees, tapped for six of eight nominations for Best Novel, and six of seven nominations for the Andre Norton Award for Young Adult Science Fiction and Fantasy.

Additionally, the list indicated a markedly multi-cultural theme, from the nomination of Helene Wecker’s acclaimed fantasy The Golem and the Jinni to the inclusion of international writers Samatar and Alaya Dawn Johnson, who also received two nominations for YA novel and Best Novelette. Jamaican author Nalo Hopkinson, Chinese-American writer Ken Liu, and Hawaiian author Linda Nagata also stood out in a list full of highlights.

The “Best Novel” category included a nod to Neil Gaiman‘s novel An Ocean at the End of the Lane. The Ray Bradbury Award for Dramatic Presentation recognized Gravity and Pacific Rim along with the 50th anniversary episode of Doctor Who, the second installment of The Hunger Games franchise, indie thriller Europa Report, and the acclaimed sci-fi romance Her.

The Nebulas are among the speculative fiction industry’s most prestigious annual awards. Unlike the Hugos, which are fairly crowdsourced—eligibility requires an inexpensive membership to WorldCon, the annual World Science Fiction Convention—the Nebulas are closed to members of the Science Fiction and Fantasy Writers of America (SFWA).

Though the SFWA is a relatively small group of about 1,800 people, it oversees one of the most important awards in publishing. Recently the organization has grappled with ongoing issues related to sexism and an increased tension over growing cries for diversity and equality in speculative publishing.

But the tide is clearly changing, as the Nebulas list indicates. Recently, a wildly successful Kickstarter anthology called Women Destroy Science Fiction! thumbed its nose at the ongoing debate over the presence of women in speculative fiction. It was so popular that the magazine sponsoring the anthology, Lightspeed, combined with its sister publications, Nightmare and Fantasy, to produce Women Destroy Horror! and Women Destroy Fantasy!

It will take a lot more for women and writers of color for these kinds of milestones occur outside the industry. Yesterday’s release of annual book review statistics by the industry watchdog VIDA revealed that mainstream literary publications continue to sharply favor books and reviews written by men. But change is obviously occurring.

And within a science fiction community that intersects with other deeply troubled corners of geek culture, where women are facing the same types of challenges, that can only be a good thing.