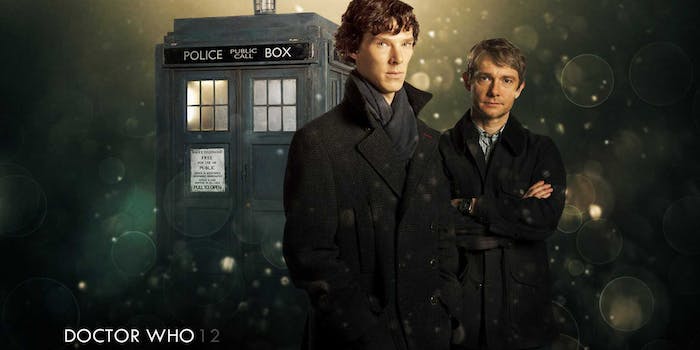 After Matt Smith's announcement that he's departing as Doctor Who, fandom has been rabidly speculating about his successor.

Who will be the next Doctor? After Matt Smith’s announcement that he’s retiring from the lead role in Doctor Who, British tabloids and sci-fi message boards are rife with speculation.

The casting of Doctor Who’s title character is the geek world’s equivalent of who will be the next James Bond. And as it happens, UK betting company Ladbrokes was offering 3:1 odds on Skyfall actor Rory Kinnear to fill Matt Smith’s shoes as far back as March. Most fans, however, are unlikely to take that bet.

Almost all previous Doctors have been relative unknowns, whereas Kinnear enjoys an illustrious career with the Royal Shakespeare Company and in blockbuster movies. For the same reason, we kind of doubt that A-listers Tom Hiddleston (The Avengers) and Benedict Cumberbatch (Sherlock, Star Trek Into Darkness) are going to be entering the TARDIS any time soon.

Look a little further down Ladbrokes’ list of possible Doctors, and you begin to spot some more likely choices—from a fan’s perspective, that is. Ben Whishaw (5:1 odds) is already a fandom favorite, thanks to being a talented actor who makes quirky career decisions (playing a male Ariel opposite Helen Mirren’s Prospero in The Tempest, for example) and looks like a real-life anime character. 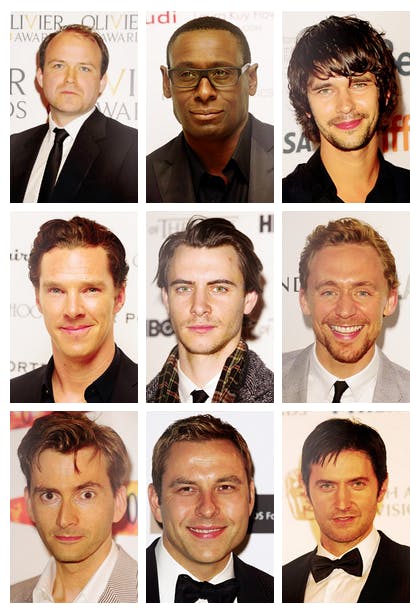 Then there’s Colin Morgan, star of the BBC’s Merlin, who falls into more or less the same demographic as Ben Whishaw, and Harry Potter stars Rupert Grint and Daniel Radcliffe as outliers. They may not seem like ideal casting choices at first, but they’d certainly boost the show’s ratings: There are already a bunch of Merlin fans ready to start watching Doctor Who if Colin Morgan does get cast.

Eagle-eyed readers may note that all these actors have something in common. Firstly, they are all guys. And secondly, they’re all white. Ever since former Doctor Tom Baker bid good luck to his successor, “whoever he or she may be,” fans have been debating whether it’s time for a female Doctor. Well, that was 32 years ago, and all subsequent Doctors have remained resolutely male.

“I think it’s time for a lady Doctor,” writes one fan on Tumblr. “A lady Doctor who is cool, charismatic and charming. There’s only one woman who fits all these perfectly and that is… Helen Mirren.” Of course, some people are horrified by the idea of a female Doctor, but Helen Mirren isn’t one of them. She’s already said she’d be interested in the role, adding, “I don’t want to just be the sidekick.”

When it comes to James Bond, traditionalists can argue that the character is based on a series of novels about a white man. But in the case of Doctor Who? No dice. As a near-immortal alien who “regenerates” into a new persona rather than dying, the Doctor can be anyone you like. And there’s already canonical evidence of other Time Lords regenerating from one gender to another. As for race, there’s really no good reason why the Doctor’s skin pigmentation has remained so similar throughout the previous regenerations.

The only non-white actor anywhere near the top of Ladbrokes’ list is Homeland star David Harewood. Doctor Who fandom, however, is far more interested in Richard Ayode. So much so that there’s already a Change.org petition in his name, and a Tumblr account called richardayoadefor12thdoctor. “Richard Ellef Ayoade,” it explains, “is a British comedian, actor, writer and director best known for his role as Maurice Moss in The IT Crowd. He is also EXTREMELY doctor-who-able.”

Realistically speaking, the next Doctor won’t be a woman, and is only slightly more likely to be played by a person of color. Showrunner Steven Moffat is not exactly known for his progressive stance on female characters, although as Tumblr user old-spooort points out, maybe a female Doctor would do him some good: “Romola Garai should be the next Doctor… and she wouldn’t take any of Steven Moffat’s sexist nonsense.”

So: No one actually knows who the next Doctor will be, but he’s almost certain to be a man, and probably won’t be anyone famous. Which is a pity, because we all know who’d really be a perfect choice to play an immortal, time-travelling eccentric: Tilda Swinton. 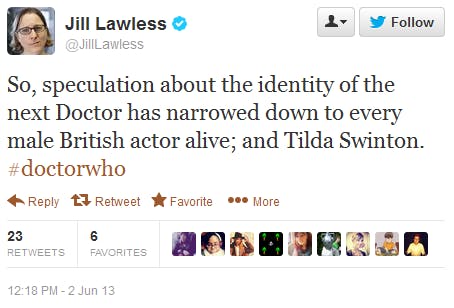