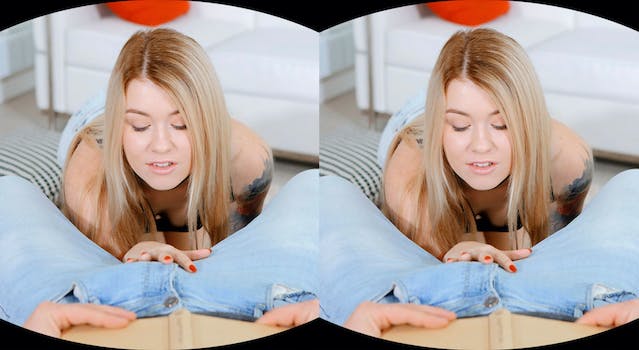 How much does VR Hump cost?

Finding the content of your dreams is a breeze on VR Hump thanks to the site’s use of categories and tags. Each video on the site is tagged with its fetishes and kinks under the videos. Meanwhile, its category system allows you to get a head start by selecting options from the sidebar.

One surprising area VR Hump truly shines in is on its explainer page. The site has in-depth explanations of how to watch its content on a host of different VR devices. You’ll even find separate pages for how to watch on mobile headsets, desktop VR headsets, and video game console VR headsets. It’s incredibly detailed and perfect for new users in a time period where plenty of sites assume you’re already experienced.

Directly under each video is a big button that says “Join Now.” Click this link and you’ll be taken directly to the membership page for the video’s original creator. VR Hump is free from obnoxious ads and pop-ups, making it the sort of site where you don’t have to worry about clicking links.

What are the drawbacks of VR Hump?

When you’re dealing with a site that features thousands of clips, sorting features quickly become important. We love VR Hump’s use of categories, but the site still has room to grow when it comes to sorting. For example, users can’t sort their searches for clips by longest to shortest. It makes sense, you don’t want people just checking out the longest scenes. But it would be nice if you could filter them this way.

3) Lack of diversity in performers

Is VR Hump worth it?

VR Hump may have a silly name, but in a world where content is king, it earns a shiny crown. Most sites bury their best free content, but VR Hump has it featured clearly at the top of the page. They realize why you’re there, don’t create roadblocks, and help you get going. On top of how easy it is to use, VR Hump lets you downloads every scene, even full-length ones. That would be enough to recommend it before you even got to the free samples.