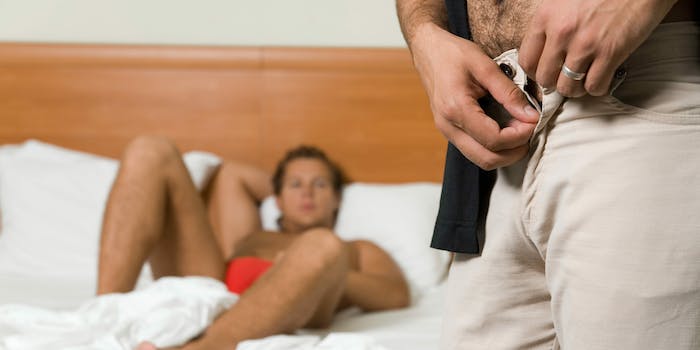 From beefcakes to smooth and sleek twinks, we've got your man-on-man tastes covered.

Male Access is a delight; it offers many kinds of scenes, from playful to sensual to a tasting of various genres. Access’ library is huge, plus you can try the service out for free for a whole week!

A site membership includes a giant library, 17 sub-sites, a more diverse range of performers, and thousands of 4K scenes. Thanks to category searches, you’ll also find a wide range of genre content, even including some soft-core and bisexual scenes!

With thousands of scenes from over 200 studios, Naked Sword is a great example of a site that offers a little something for everyone. You’ll find diverse performers, different body types, and even sex act tags, Naked Sword is both packed with options as well as fun to explore.

From group sex to singles to intense toy play, nothing is left to the imagination. If you’ve ever wanted to watch guys who look like superman have sex, Lucas is here for you.

The only downside to Lucas Entertainment is the exclusive features super ripped dudes, leaving thicker bears out in the woods. For most viewers, this won’t be a problem, so go ahead and enjoy.

The COLT Studio Group is comprised of four different studios: COLT, Buckshot, Olympus, and the Minute Man Solo Series. With scene titles like “Manly Heat” and the quite literal “Curious Scene 2,” you can guess the kind of fare you’ll find here.

But narrow down your search with filters like Business Suit, Cigar/Smoking, and Cowboy for more specific findings among these scenes that have a sun-drenched nostalgia to them. After all, the company has been around since 1967 and is now home to exclusive models like ginger super go-go dancer Seth Fornea.

Chaos Men has a fairly robust search function that makes it a bit easier to find the stuff that gets you off. Alas, the search tech is a bit dodgy as it seems like not all of the videos have been tagged with the proper metadata.

Browsing the site feels a bit like cruising in real life: sometimes you have to let a bunch of guys pass you buy before you spot one who really piques your interest.

Over the years Sean Cody has featured over 1,000 models. Although a vast majority are white men, there is also content featuring Black, Latino, and Asian men as well. If you’ve always daydreamed about guys who look fresh out of college, Sean Cody is your answer.

Performers range from plucky newcomers to established pros, and while the site celebrates Black performers, it features models of all different ethnicities. It’s a real pleasure to scroll through Noir, particularly with the frequent updates.

New scenes appear almost every day, and there are live cam sites if you want something more personal. There’s also a massive backlog of videos dating back to the 90s.

Once again, insert disclaimer about primarily thin, white performers (guys, we’d really like to stop repeating ourselves here.) Bel Ami is a great site, but we’d love to see it do just a little bit more.

Ah, so you’re a nature lover? Fortunately, someone’s brought a camera to a bear habitat. Sit back and enjoy the view as hunks get mauled by big strong hairy men.

Adding to the delights are the genuinely beautiful locations in some of the scenes. The studio really knows how to find some attractive outdoor locations, and the directors have an amazing knack for directing their guys into every sex act imaginable. Kudos to these big, beautiful men.

Helix’s only problem is a sense of sameness, from its incredible lack of diversity among performers to how many scenes immediately end up in a bedroom. Variety is the spice of life fellas, try the living room.

While Helix has room to grow, it’s library release schedule will make it hard for twink fans to deny. We just hope they try harder in the future.

Tim Tales is where you can find beards, tats, and general burliness galore. It also gets an A+ for diversity amongst its pack of stars, which includes exclusives like Tim Kruger and Emmanuel Rucci. You can also catch them in the site’s backstage content—like behind-the-scenes shoots and posts of the men hanging out together off the clock.

TimTales uploads two new videos per week, with additional perks, and it takes pride in being gay-owned and -operated, and supporting exclusive models. Memberships are offered either on a recurring ($29.95 monthly) or non-recurring ($32.95) basis.

Looking for the perfect combination of hardcore gay sex and transgressive stories? Say Uncle is sure to push your boundaries AND tighten your jeans. This hardcore super-site offers 16 themed sites, each with dozens of videos.

Kink is a little bit pricier than some other sites, but it comes with SO MUCH CONTENT. And there’s no chance you’ll regret your investment; you can tour the full site and watch previews for free until you’re ready to invest.

Sex scenes and product offerings are mostly kinky, so be ready for lots of leather and bondage. The studio takes sex very seriously, so don’t expect any smiles or giggles here. Preview this site’s masculine swagger for 3-days at only $3 and see if this Hot House turns your thermometer up.

Plus, the site also had a cam site on hand! With multiple uploads each week, unique original content, and diverse performances, Cocky is reasonably priced at only $24/mo. If you want to beat it somewhere off the regularly-beaten track, we highly recommend giving CockyBoys a try.

The models are all big beefy guys who are clearly professionals. Their dancing is top-notch and crowd-pleasing, and their dicks are impressive (mostly uncut, too). Over the course of an evening, you’ll see the men stripping down, taking showers, dancing on poles, and of course, jerking off.

There are a couple of options when tuning in. You can go for the live feed from the stage, which is just like being there in person (though you’re less likely to be splashed with sweat). Or you can tune into the spycam backstage to see them preparing to waltz onstage. Or, you can check out the private sessions in smaller, more intimate booths. There are no opportunities to interact with the guys, unfortunately, unless you jump over to partner site Stock Bar Cams.

Instead it focuses strictly on passionate hardcore scenes between guys who just want to do guys. It’s simplicity is almost refreshing. While it could offer more diversity we appreciate the purity of its content.