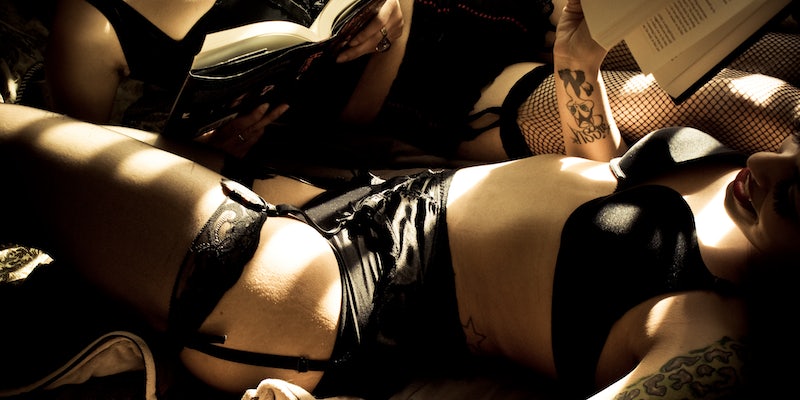 The ethics of representation

There are plenty of people who want to supporting adult content but can’t always afford it. Others are living in a strict household where even a discreet “CCBill” charge leads to uncomfortable questions.

Ethical… and everything else

ManyVids has no ads, and the company vows to remove pirated videos. They believe that “stolen content hurts all of us and has a negative effect on everyone in the industry.”

MV Tube is easily the best tube site on our list for one simple reason: it puts control in the performers’ hands. It’s expansive, pays models decently, gives users a wide selection of kinky and vanilla categories, and is relatively easy to navigate.

Just type “MV Tube” into the ManyVids search bar and you’ll find free content uploaded by some of your favorite stars with no monthly recurring membership fees! Feeling like treating yourself? Follow your favorite MV Tube stars and spring for exclusive paid content as you’re able.

In their series Bellesa House, stars choose partners they most want to have sex with. The resulting sex is fire. Watching the cast work closely with director Jackie St. James adds to the charm, and gives viewers a peek inside of the site’s production atmosphere.

Bellesa makes beautiful films with high-quality sex, yes. But once again, the site could do for some ethical evolution. You don’t see much in the way of body diversity across the site. Worse, many of the plot lines have problematic power dynamics and concepts of consent.

Bellesa’s new direction is a far cry from its messy start. It’s still one of the best ethical tube sites for folks who want to get off and feel good about it.

Trouble believes that representation is essential to the wellbeing of queers. QPTV FREE is a rotating selection of five films offered at no charge. If you’re interested in going premium, TROUBLEfilms allows you access to the whole network for one price, and the site offers sliding scale monthly subscriptions.

Erika Lust has created an empire of high-quality sex films that are uniquely cinematic and inclusive. In addition to directing her own films, Lust collects works by other directors with a similar artistic vision.

Membership costs to each site vary. Lust Cinema membership grants you access to Else Cinema, and you can add an XConfessions membership for $2.95/mo.

If you’re not exclusively into secret smut or soft-core, the Lust Cinema bundle is a steal. Looking to treat yourself to a dirty movie night but your budget doesn’t allow for recurring memberships? You can also buy films individually at the Erika Lust store.

In December 2020 the site eliminated unverified accounts, disabled downloads, and created a moderation panel in an effort to ensure that nonconsensual content wouldn’t be posted. Performers and sex worker advocates have been demanding the tube site institute these policies for a long time to protect their content from being repeatedly stolen and posted to the site.

Unfortunately, most of the language in the article comes directly from Traffickinghub, an organization with ties an evangelical anti-sex group called Exodus Cry. Traffickinghub aims to shut the tube site down entirely, claiming to protect people from being exploited by Pornhub’s laissez faire moderation policies. The organization claims they aren’t a anti-porn, but their crusade proposes no strategies to protect the mass of sex workers who depend on the site for vital income.

The moral panic surrounding the article caused Visa and Mastercard to removed payment from the site. This means the site will default to cryptocurrency, making it largely inaccessible to performers and users alike.

The variations in content, genders, and bodies on PinkLabelTV are representative and empowering. These are real-ass people having real-ass sex. Narratives deal topics of consent and kink, gender identity, eco-sexuality, and sexual orientation.

Over the years, Kink has collected a massive library with some of the most diverse and transgressive content the internet will allow. One of the site’s trademark features are the pre and post-scene interviews, where performers are encouraged to honestly share their feelings regarding their scene.

The site also has some strong policies outlined in its model bill of rights, which was revamped in 2015 after popular Kink performer James Deen was accused of sexual assault. The bill specifies boundary and pay policies, like the use of a house safe word, or the prorated pay policy. Prorated pay means that stars don’t feel pressured to violate their own thresholds due to fear of not being paid.

Kink is a subscription-based site, so it’s a solid choice if you’re open to a budget commitment for nearly-infinite content. It also doesn’t collect your data like some ad-based sites, because your privacy is a priority. Kink’s interface is plain but it’s easy enough to navigate.

Filmmaker Kate Sinclaire has created a diverse, uplifting, body positive space for performers to share their pleasure with the audience. It’s an experience that shouldn’t be missed. Rentals have suggeted prices based on your budget, or you can create a price that works for you.

While you’ll find three of the studio’s films on PinkLabel’s streaming service, the studio has about 20 more exclusive films on their site, and a few great films from other studios like altSHIFT and TROUBLEfilms. With free membership that allows featured rentals, there’s no reason not to check it out.

The site is simple to navigate and sports a reasonably priced monthly subscription, which includes a limited number of films. Then you can pay to unlock more films from inclusive, feminist studios like like JoyBear and Foxhouse Films.

Paulita Pappel is a self-proclaimed exhibitionist and voyeur, and she created Lustery in the name of “reclaiming your own gaze”. Seeing relatable, intimate homemade sex on the site is an empowering experience for performers and viewers at the same time.

Lustery also hosts both the POV blog and podcast, where you can get to know couples from the site and other industry pioneers. Both blog and podcast are incredible sources for current outlooks on sexual health, culture, and identity.

Joy doesn’t have a specific ethics statement on the site, but has spoken to her ideology on various platforms over the years. Her cast of collaborators and the nature of her stories give the viewer a sense of the atmosphere behind the camera. The only flaw at Cinema Joy is the price-point: without any free trial options, it’s difficult to get a lay of the landscape before you commit to the monthly membership fee.

The site will almost exclusively feature thin, white cis-women romping with conventionally built, white cis-men. If you’re looking for representation, you’d do better to read the erotica and use your imagination.

In 2003, Justin Santos started filming sex in a way that celebrated real pleasure. Since then, JoyBear has grown into an ultimately naughty British library of smut films. The site’s creator lays out his ethical ideas on JoyBear’s about page, with standard highlights such as fair and timely pay and a respectful, consensual atmosphere behind the camera.

The company’s journal has a ton of behind-the-scenes footage and pictures that illustrate a lot about the positive vibes coming from their sets, providing not just assurance, but more quality, feel-good entertainment for conscious viewers.

Okay, do you have a small fan nearby? Great. Put on something gauzy, flip that switch on high, and point that fan directly at your face. It’s time to dive click-first into digital romance novel vibes courtesy of the creators at Sssh.com.

Instead of hiring performers to perform scripted sex, MakeLoveNotPorn sources real sex tapes from real, everyday people. MLNP calls itself the world’s first social sex platform, and that sex-positive attitude shines in every video. Scroll through the curated collections like “MakeMeTimeLove” or browse the site’s whimsical tags like #giggly, #yes!yes!yes! and #procrasturbation.

Contributors receive half of all rental fees. The site’s requirements for submission are standard: photo IDs, consent of all parties, and because it’s real world sex, the pleasure is organic and very equitable. Best of all, membership to MakeLoveNotPorn is free, and from there you can rent individual videos for $5 each.

On OnlyFans, adult models create and run their own page where they can either post content for free, share specific posts under a pay-per-view system, or invite fans to subscribe for a monthly fee.

Performers generally run their own page or hire out a small team to help them navigate it, essentially giving sex workers far more control over how adult material is created, presented, and shared. Additionally, OnlyFans creators receive an 80 percent payout, which is particularly high by industry standards.

When you subscribe to a model’s OnlyFans, you’re essentially giving them funds in one of the most direct ways possible. The only downside is that you’ll have to subscribe to specific models’ pages independently; the best way to find them is through Twitter, Instagram, ManyVids, and other social media sites.