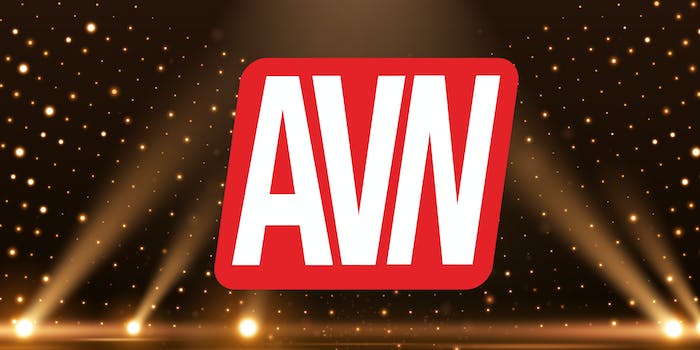 All of the AVN Award Winners & Where to Stream Them

Here are this year's best newest stars, hottest scenes, and best movies as chosen by the AVNs.

You can find the full list of AVN winners on the awards website. It will include all the awards for best retail stores, pleasure products, and Hall of Fame inductees.

If Lacey Lennon as Black Widow isn’t fantastic enough, Seth Gamble returns as Deadpool. What a blessing! This parody came out “Best” in a few categories:

Sister Kenna is a young, doe-eyed nun who just joined a convent, but sin is stirring in the house of the Lord. Under the watchful eye of Mother Superior, Sister Kenna seeks to understand her sexuality. Meanwhile, Father Tommy tries to avoid temptation.

The series is full of sexual tension and character-driven performances. So it’s no wonder that the MissaX tale took away several Best Performer awards.

Adult Time‘s original series tells the story of Casey Kisses and her journey to transition. The series is part biker drama, part self-discovery tale, and all steamy sex.

You can search for smut by category, performer, or studio. Once you finish Casey, there are so many more incredible original films and series. And an Adult Time membership gives you access to them all.

4) Diary of a Madman

When it comes to being “Best” in any kinky category, it’s really hard to compete with Kink.com. And this year’s winner Diary of a Madman certainly lives up to its name.

The 4-part series tells the tale of a creepy stranger (The Pope) stalking Victoria Voxxx and keeping her captive in her own home. As he keeps himself busy by torturing her with floggings, electrocution, and bondage, his delusion grows. It’s an intense and sinister fantasy, and will absolutely tickle all of the dark places in your… soul. Yeah, your soul.

Superstar Gianna Dior was the belle of the balls this weekend when she took home an illustrious Performer of the Year award. She’s featured in some of the Vixen network’s hottest films, including the Psychosexual series. The performer also walked away with some pretty incredible “Best” moments.

Vixen Media’s flagship site has all the best scenes to fold you into a fantasy. Featuring the most exotic locations and dreamy escapist narratives in 4K, the site caters to those who want to get away while they get off. Plus, the site is always updating, so there’s fresh new content with the hottest stars on any given day.

With over 3000 lesbian scenes featuring the hottest stars in the adult scene, it’s no wonder Girlfriends Films is always featured when it comes time for awards season. Not only does the site update its content daily, but membership gives you access to behind-the-scenes interviews and other content. If you’re looking for a girlfriend, look no further, babe!

This starlet was a perfect pick for niche performer of the year. She’s got a whole set of superior sex skills to enjoy, whether you’re into wrestling, foot worship, or small-dick humiliation, this badass babe can do it all– and do it well.

It’s no wonder both of these ladies host steaming hot ManyVids content. After all, the clip site hosts videos and content made by the performers themselves. Your hands can be in every cookie jar with MV. The site has videos, photosets, live cams, phone chats, panties for sale, and other options.

Bella French, CEO of ManyVids, co-created a platform on which sex workers could have more control and ownership of their content. The result? You’re free to browse the site knowing you’re directly supporting real sex workers.

Vixen’s network of channels pulled plenty of awards at this year’s AVN Awards. Blacked, Tushy, and Slayed all went home with their share of accolades. But the kink-focused site Deeper featured some solid “Best” moments.