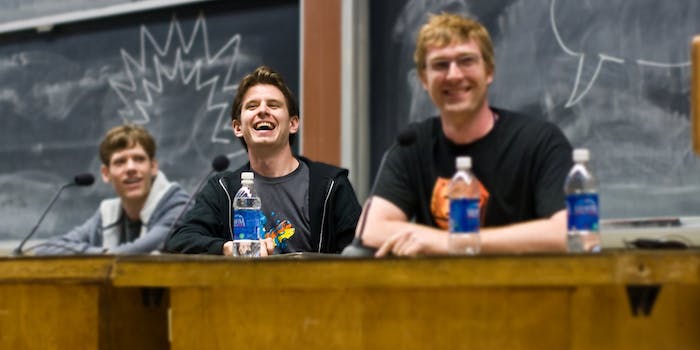 In June 2011, Reddit’s home for all things xkcd—the popular webcomic created by Randall Munroe—got a new and controversial moderator.

He went by the name “soccer.” His peers described him as a conspiracy theorist, Holocaust denier, and men’s rights activist. Soccer is outspoken on Reddit about his skepticism of some widely accepted facts about the Holocaust:

Instead of keeping these opinions to himself, soccer used r/xkcd’s sidebar to promote subreddits like r/conspiracy and r/mensrights—two forums that have nothing to do with xkcd, an eight-year-old series that satirizes Internet and pop culture.

Now Munroe himself has come to Wyboth’s defense. He hopes Reddit administrators will give soccer the axe.

“I can confirm that I absolutely would not want the kind of person who would link to /r/mensrights, /r/conspiracy, or /r/theredpill in charge of any xkcd-related community. Ugh,” Munroe wrote in a rare Reddit comment Sunday. “Thank you so much for trying to straighten this out; I hope you’re successful in contacting the admins.”

Munroe’s comment was made in response to a petition calling for Wyboth to be reinstated. It has collected more than 700 digital signatures.

“I don’t trust soccer,” moonchild02 commented. “He’s a narcissistic, sociopathic, misogynistic skinhead who doesn’t deserve any of the positions of power that he has been given on Reddit. He needs kicked to the curb. /r/xkcd is an awesome subreddit because XKCD is an awesome comic! soccer doesn’t deserve to be in charge of it.”

Despite the outrage from xkcd fans, it’s unlikely much will change. Administrators often refuse to involve themselves in moderator drama.

As the head moderator of r/xkcd, soccer cannot be removed by any other moderator. This gives him significant influence over a subreddit. In the past, this level of influence has led to site-wide controversy.

In June, the head moderator for r/atheism banned image macros from the default subreddit in an effort to cut down on trolling, blog spam, and cheap content. Most importantly, he meant to give the five-year-old community some much-needed guidance. The new rule caused an uproar around the community, where more than 25 separate posts claimed that the new guidelines are a form of censorship. A poll found that 49 percent of users despised the new rules, claiming they lost their voice and that r/Atheism was “no longer an open forum.” About a month later, r/atheism was removed from the list of default subreddits, forums which all non-logged in users see when they visit the site.

Around this time, r/politics moderators announced a ban on stories from left-leaning news site Mother Jones, which leaked Mitt Romney’s “47 percent” speech in 2012. On Reddit and Twitter, the decision was met with massive backlash; many users and journalists cried censorship, accusing the mods of abusing their power. Moderators eventually relented on a few, while 100 other sites are still blocked.

In January, moderators of r/nfl angered the community when they began banning links to a Deadspin tell-all from former Minnesota Vikings kicker Chris Kluwe. An r/nfl moderator explained that they were not censoring discussion about Kluwe himself, just blocking “political” submissions. Moderators did not “specifically set out to remove any submission related to” Kluwe, they told us. “Rather, we are sticking to our rules regarding political submissions—a rule the community requested last year, largely because of previous threads regarding Kluwe or on the Redskins name which could bring out the worst in some users.”

In an effort to rein in the power of moderators, Reddit administrators secretly implemented a new rule in December that prohibited a user from moderating more than three default subreddits.

Nearly every single one of these moderator-related controversies have occurred with no input from Reddit administrators. Admins have historically adhered to a strict hands-off policy, only banning subreddits when they feature sexualized images of children, for example, or when they ignite massive, worldwide controversy, as was the case during the Boston Marathon bombings. Since there’s no democratic system to effect change in the moderator roles, moderators have virtually dictatorial powers over their communities.

“If an abusive mod can be removed from a subreddit, then every subreddit that has any amount of mod drama at all will be flooded with people begging the admins to remove mods,” AdvocateforLucifer commented. “Hell, that even happens now, without the precedent. If the admins do this, then they look like hypocrites every other time they don’t remove a bad mod.”

The sidebar links to r/conspiracy and r/mensrights on r/xkcd have not been added back. With the future of r/xkcd moderation uncertain, many redditors have begun using an alternative subreddit, r/xkcdcomic, instead.

“Some have suggested that the admins could make Randall Munroe the mod, but I think that would be a terrible idea. What happens when the Atlanta Braves decide that their social media team then has a right to /r/Braves?” r/xkcdcomic creator mattster42 told me.

“The best solution, and the solution that seems to fit the spirit of reddit the most, would involve guidelines for a democratic process. For example, if a third of a subscriber base clicked an ‘impeach’ button on a sub within a one-week period, either a mod election or direct admin intervention could happen. But to just call on the mods to take control and give it to someone else means that no moderator can be completely secure in the position, no matter how good he or she is.”

As of April 9, links to r/mensrights and r/conspiracy have been added back into the r/xkcd sidebar. 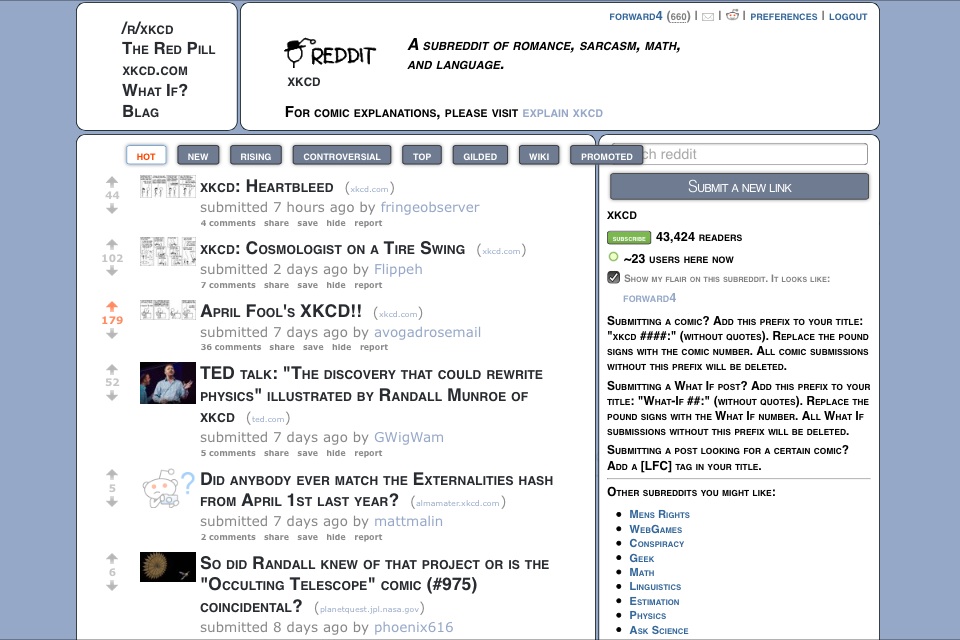