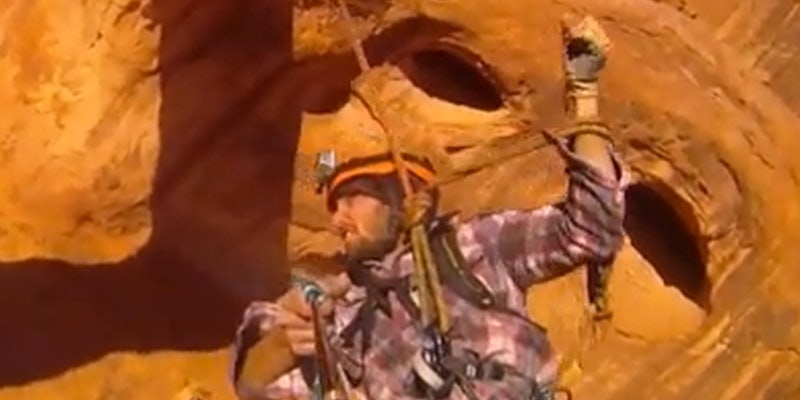 Kyle Lee Stocking died Sunday while swinging from a makeshift rope swing tied to the top of the famed Corona Arch in Moab, Utah.

A YouTube video is being chastised this afternoon as a leading source of inspiration in a freak extreme sports accident that resulted in the death of a young man.

West Jordan, Utah, native Kyle Lee Stocking died Sunday while swinging from a makeshift rope swing tied to the top of the famed Corona Arch in Moab, Utah, an extreme sports destination christened “the grandaddy of all cheap thrills.”

The 22-year-old died upon impact when his body hit the ground 140 feet below the top of the arch. According to County Sheriff Lieutenant Kim Neal, the length of rope to swing from the arch was miscalculated and when [Stocking] swung under the arch, he struck the ground … receiving fatal injuries.”

Arch swinging has become a popular pastime in recent months thanks to attention shown to it by a number of YouTube video creators, most notably Devin “Supertramp” Graham, whose “World’s Largest Rope Swing” video has more than 17 million views in the last 13 months.

Many of those following Stocking’s story have turned to Graham’s video, leaving comments on the clip that memorialize Stocking and implicate the “World’s Largest Rope Swing” in his death.

“I hope you feel good about this,” wrote another. “A kid from South Jordan got huged because you make this look so cool. Well done!”

Graham has remained mum on the situation, refraining from commenting on Twitter or Facebook about Stocking’s death. He did not respond to the Daily Dot’s request for comment.