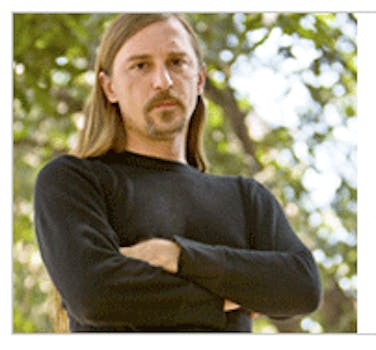 You've seen his pensive stare on Wikipedia. Now get to know the site's Web programmer.

There’s more to Brandon Harris than long chestnut locks and an intimidating glare.

The Wikipedia programmer’s photograph has greeted users on every page of the site for the past week as part of the nonprofit’s most recent fundraising drive. Now, thanks to social news site Reddit, you can learn everything ever wanted to know about Harris. He took to the site’s live question and answer section Sunday.

Considering Wales’ personal appeal quickly became a popular meme on places like Reddit and 4chan, it’s no surprise that Harris has also become as Internet famous as Wikipedia founder Jimmy Wales, who’s image has typically be plastered on the site.

How did he do? We’re guessing that Wikipedia saw a nice uptick in donations yesterday.

After answering nearly 300 questions, the verdict from redditors seemed to be nearly unanimous: Brandon Harris is a damn nice guy. “I really like you dude, when I get paid next week I think I’ll donate 20 bucks,” redditor DanTheRip wrote.

We’ve collected some of the best exchanges from Harris’ session below. Check out the full session here.

Q How does it feel being in a picture that 90% of people on the internet have seen? (Waffle_Sandwiches)

A:Well. I hadn’t thought of it in that context before. Now I’m kind of overwhelmed.

Q: Do you agree with Wikipedia’s decision to run a fundraising campaign rather than selling ads? (m777z)

A: Absolutely. Running ads would introduce bias to the articles. We can’t do that: “The Deepwater Horizon Disaster”, sponsored by BP Energy. If you saw that you’d think that BP had paid for better press, even if they hadn’t.

Q: How does it feel to be part of something like Wikipedia? I mean, do you ever reflect on the impact of it on people’s everyday life? (Anserine)

A: Yes. There are times when the “vision of the mission” settles and there’s this really weird sense of peace and purpose. Like, an understanding of the full implications of “making the sum of human knowledge available to everyone for free.”
It’s a pretty epic feeling. I can’t describe it other than “it’s one of those emotions where you feel the edges of your eyes start to tear up”.
I kind of live for those moments, to be honest.
You can’t live like that all the time, mind you. The practicalities of what we do always bubble up.

Q: Teachers across America tell their students to never use Wikipedia to find information because it can be edited by anyone, and therefore could be false at any point in time. Any truth to this? How likely is it really to be fooled by a false fact? (singer_table)

A: Well, in theory, you shouldn’t be using Wikipedia as your primary source – just the place you go to to find the primary sources. Every fact is supposed to have a citation and reference.

There was a study done that said that Wikipedia has about the same error rate as the Brittanica, which is interesting.

People inject false facts into articles all the time but they usually only stay there for about .5 seconds before they’re caught and reverted.

Q: what shampoo do you use? your hair is amazing… (Joseph_Gordon_Reddit)

A: I actually switch shampoos and conditioners about every 40 to 60 days. A trick an ex taught me, many years ago.