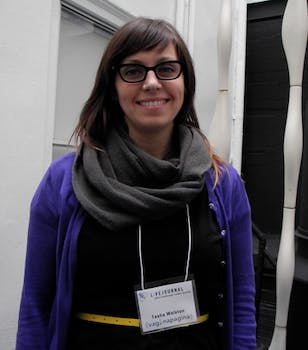 Vagina Pagina, which deals with sexual health, is one of LiveJournal's breakout communities.

When LiveJournal announced its six breakout communities for LJ Media today, one of these groups was not like the others. While five center around entertainment and hobbies, Vagina Pagina covers sexual health, which is a different subject altogether.

It’s obvious how increased publicity, an advertising campaign, and a growth strategy could benefit an entertainment community. But how is LJ Media a benefit when the community’s users are discussing a topic they’d rather keep private?

Founder Tasha Walston told the Daily Dot at a LiveJournal conference today  the partnership was an easy decision for the Vagina Pagina community. The Seattle, Washington user, who goes by rockstarbob on LiveJournal, said the decision was based on educating as many people as possible, in, what its mission statement describes as “an empowering and educational community about vaginas, vulvas, and sexual health.”

“The idea is that the more people have access to a community like VagPag, the more lives we can change. The ability to grow Vagina Pagina would be a huge asset,” she said.

Although Walston has owned and moderated the community since she founded it in September 2001, she said the decision to become an LJ Media site was not her own. The 35-year-old mother and adjunct professor began posting about the possible LJ Media partnership as early as December on Contact VP, the community’s sister group designated for moderation questions.

“There was some concern about advertising on the site. Some ads might be sexual, but really inappropriate for our content. We’ll have to see how that plays out,” she said. “Otherwise it’ll be the same experience as before. The only difference will be an uptick in traffic and new users we will have to educate.”

In this case, “educate” means to remind. Walston said the community rarely bans anyone, but moderators frequently send reminders to users who are using judgemental or insensitive language.

“We want to empower people,” she said. “If somebody posts that they just had unprotected sex, you’ll get warned if you judge them for it. Instead, you should empower the poster with information related to their actual concerns.”

It’s one of the ways Walston fulfills her ultimate goal for the site; making it a safe space for every user.

Maintaining a safe space takes a lot of work. The community has 33,000 users and 14 moderators to police it. That’s a lot considering LiveJournal’s largest community, ONTD!, has just eight moderators for over 100,000 members.

Walston said she sometimes spends eight unpaid hours a day working on Vagina Pagina. When the site grows through LJ Media, it’ll require even more work. However, Walston is confident that it’s the right direction for the eleven-year-old community.

“I founded the group because I realized that people aren’t getting great sex ed, and there’s no quality forum where they could talk about these things and get a real answer. For some people, this is the only place they can get answers about sexual and reproductive health,” she said. “The more people that can have access, the better.”