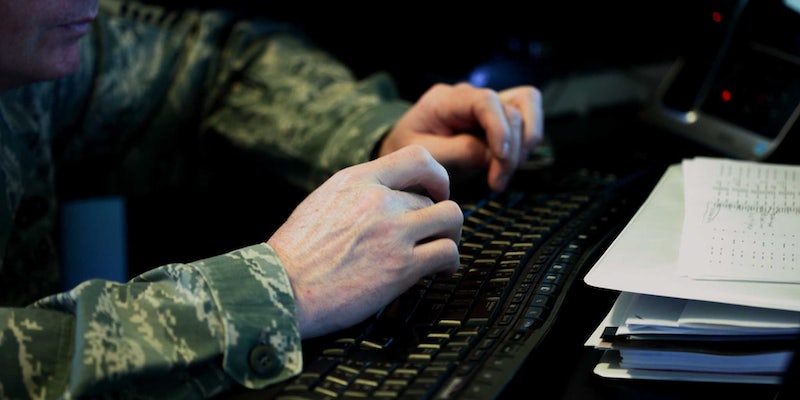 The Pentagon releases its own guide to electronic warfare

Continuing their effort to broadcast to the world just how seriously they take the threat of cyber and electronic warfare, officials at the Pentagon have publicly released their first ever field manual for “Cyber Electromagnetic Activities.”

The 96-page document won’t tell you how to conduct an electronic attack, but it does go into great detail about the protocol expected from soldiers who are increasingly trading in guns for computer terminals to serve their country.

“United States forces operate in an increasingly network-based world,” reads the introduction to the newly issued guide. “The proliferation of information technologies is changing the way humans interact with each other and their environment, including interactions during military operations.”

The electromagnetic spectrum, or ES, covers a significant range of modern military activities. Any task involving infrared, radar, cellular, TV or radio waves would fall under the purview of these ES guidelines. This can include tasks as varied as drone piloting, missile targeting or GPS navigation.

“The manual does not explain how to conduct specific [electronic warfare] attacks, but it does provide guidance to soldiers on what these sorts of operations look like in terms of protocol, terminology, and command and control,” writes Patrick Tucker of Defense One. “And it comes right as the number of potential electronic warfare operations is growing with every new radio or internet-dependent device that the military buys.”

Though a field manual dedicated to such issues is new, the American military’s drive to dominate the electromagnetic spectrum has roots going back nearly 70 years to World War II and radio jamming.

As Wired’s Brendan I. Koerner points out, U.S. dominance of the electromagnetic spectrum has been slipping in recent years with the greater accessibility of technological devices that can be used to remotely detonate bombs or interfere with U.S. military guidance systems.

“America’s grip on the spectrum has never been more tenuous,” Koerner writes. “Insurgencies and rogue nations cannot hope to match our multibillion-dollar expenditures on aircraft carriers and stealth bombers, but they are increasingly able to afford the devices necessary to wage spectrum warfare, which are becoming cheaper and more powerful at the same exponential pace as all electronics.”

The rest of the electronic warfare field guide covers a distinctly modern aspect of warfare, cyber security, and attacks. Computers now provide combatants with significant tactical advantages and liabilities, and in recent years the Pentagon and the president have made no secret of that fact. Earlier this month, the Obama administration unveiled its new framework for cybersecurity, setting standards by which the government, military, businesses, and utilities can protect themselves from hackers.

The threat of security breaches by foreign hackers, particularly the Chinese, have been an ongoing threat for the U.S. military. Last year, Chinese hackers were able to steal plans for a number of U.S. military aircraft systems, including the F-35 Joint Strike Fighter, which at $1.4 trillion, is the most expensive weapons system in U.S. history. And a survey conducted last year found that 96 percent of global businesses are unprepared for cyber attacks.

Though the Pentagon and the Obama administration like to play up the importance of cyber warfare for defensive purposes, offensive measures have been kept on the down low. It’s been reported that the U.S. was behind the Stuxnet computer virus, which was unleashed upon Iranian nuclear labs, destroying many of the centrifuges used for uranium enrichment back in 2010.

The cyber portion of the field manual, like the electromagnetic section, avoids tactical details, focusing instead on chain-of-command, defense priority rankings, and the functions of cyber operations.

According to Defense One, some military experts question the wisdom of combining electromagnetic and cyber warfare issues into a single manuel, arguing that there is a world of difference between hacking a computer system and detonating improvised explosive devices.

“There has been some debate about how traditional EW capacity will play with newer cyber operations,” said Allan Friedman, co-author of Cyber Security and Cyber War: What Everyone Needs to Know. “While there are strong similarities, cyber operations have a broader range of capacities than the traditional [electronic warfare] strategic role, and can support a wider range of operations.”

But others, like Retired Lt. Gen. Robert Elder, told Defense One that its vital for national security that U.S. servicemen and women be able to communicate across these two disciplines.

“The new [field manual] makes it clear that conducting these activities independently may detract from their efficient employment,” Elder said.