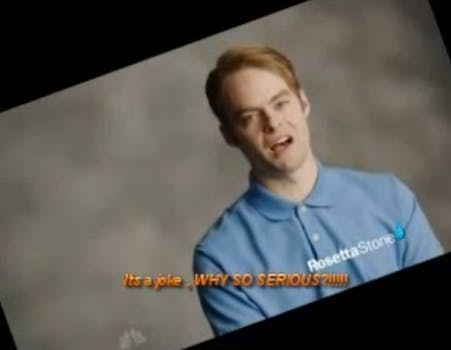 Thailand tries to get “SNL” skit wiped from the Internet

Saturday Night Live went too far with a skit parodying Thailand's sex industry, according to the country's Ministry of Culture.

A Saturday Night Live sketch parodying language learning tool Rosetta Stone and the people who use it has come under fire from officials in Thailand who claim the sketch “misrepresents Thailand and its people.” Now, the country wants the video banned from the Internet, something that’s not very likely to happen.

The sketch in question, called “Rosetta Stone,” is a parody of the language learning tool that finds men and women of every shape and color exhibiting their interest in learning new languages. Their reasons are simple: they want to trade recipes in Russian, visit French islands, and communicate better with their Spanish coworkers. That is, until comedians Bill Hader, Bobby Moynihan, and Taran Killam jump into the picture and explain that they want to learn Thai so that they “can go to Thailand for… a thing.”

The sketch goes on. We learn that “thing” is paid sex—a direct jab sent right at the heart of Thailand’s notorious sex selling industry.

On Tuesday, Thai TV outlet Thai PBS reported that Thailand’s Ministry of Culture plans to file a complaint with the United States embassy with hopes that the American government will rid the Web of this sketch.

“The government will also inform the U.S. Embassy that the commercial spoof is tarnishing Thailand’s image, and will ask the Embassy to explain the situation to the producer of ‘Saturday Night Live,’ culture minister Sonthaya Khunploem said.

YouTube did not respond to the Daily Dot’s request for comment, but chances are that Khunploem stands no chance getting the video taken offline. The site didn’t budge during intense scrutiny over its decision to keep this autumn’s controversial “Innocence of Muslims” trailer online, and the clips of “Rosetta Stone” that exist on YouTube aren’t even official clips. (NBC has a deal with Hulu that bars official videos from showing up on rival sites like YouTube.)

Either way, I wouldn’t expect to see any of the Not Ready For Prime Time Players touching down in Phuket any time soon.