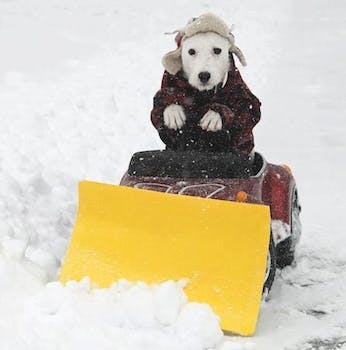 A snowplow driver who filmed himself pushing snow onto people's parked cars says the only thing he hurt was people's feelings.

A snow plow driver in Lowell, Mass., is out of a job this morning after his employer found a video of him using his vehicle to round up snowdrifts before dumping those snowdrifts onto the cars of Lowell residents. But the man says that he was actually doing his job, and everybody’s overreacting.

The snow plow driver, whose name is Mark Hussey (though he’s always gone by “Dogg”) shot the footage through this windshield while he was digging the north Boston suburb out from a big, bad snowstorm.

He told local radio hosts at WZLX that he’d already been plowing snow for 22 hours and “Decided to make a video of [his] favorite part of the day, which is when you push the snow banks back to the curbs.”

It’s a necessary part of his job—something all snow plowers do so that emergency vehicles can properly navigate the streets. The problem was the way in which the video portrays him enjoying the act at others’ expense.

“You wanna find ya cahh?” Dogg said in the video, which he removed from YouTube on Friday. “You come see me. I’ll let you know where it is… maybe. Hahahaaaaa.”

But Dogg was the only one laughing. On Saturday, Lowell city manager Bernard Lynch told Boston’s CBS affiliate WBZ that the city was “appalled by [Dogg’s actions.]

“It was a stupid thing to do,” Lynch said. He fired Dogg shortly thereafter.

On Saturday, Dogg went onto YouTube to apologize for causing any “embarrassment over this whole viral video thing.”

“I wasn’t doing any damage to the cars in the area, and I was widening the road as much as I could possibly widen it. No cars or personal property was hurt making this video or at any time during the storm. The only thing that was hurt were people’s feelings.”

Photo via Norwood and Debi/Pinterest