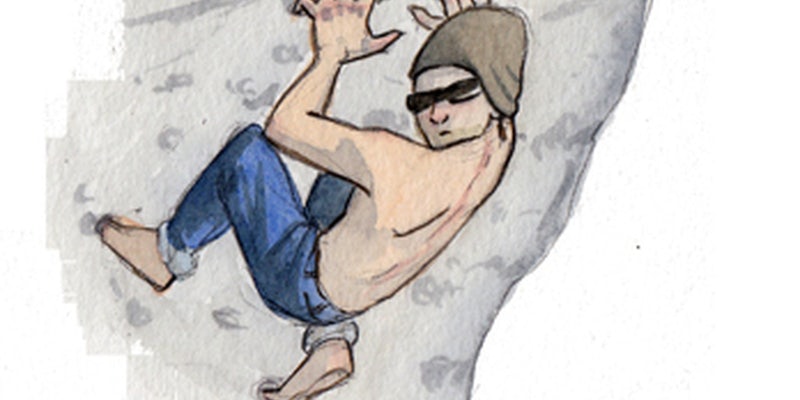 Reddit is run by 20,000 volunteers. We wanted to get to know some of them.

When President Barack Obama sat down for his unprecedented “ask me anything” session on Reddit in August, the fate of his post was in the hands of 17 volunteers, whose pseudonyms ranged from Drunken_Economist to flippityfloppityfloo.

Any one of these volunteers could have throttled the president’s AMA whenever they saw fit: Drunken_Economist might have drunkenly pressed the delete key. Or flippityfloppityfloo could have purposely banned Barack Obama’s Reddit account.

They didn’t. But the fact the president’s posts fell under the purview of a ragtag bunch of Internet volunteers demonstrates a little-known fact about Reddit’s structure.

Reddit is built on the backs of 20,000 volunteer moderators—the shepherds, janitors, and kings who hold sway over the site’s 10,000-plus communities.

With more than 40 million unique visitors and 3 billion page views a month, Reddit is a user-curated content factory unparalleled on the Internet. The social news site’s staff and cofounder, Alexis Ohanian, will tell you much of the credit goes to the users. And while that’s largely true, there’s also a distinct, important class of Reddit users often ignored or misunderstood: the moderators.

Who are they? Students, toy store employees, and tech support gurus; they’re Americans, Brits, Australians, and Norwegians. They come from all walks of life and from all over the world. Below, we’re going to introduce you to a few. But before that, we want to make sure you understand what a moderator does. And for that, you’ve got to understand a little about how Reddit works.

The site is built on thousands and thousands of communities, called subreddits, which function like independent kingdoms. Reddit doesn’t tell users how to run a subreddit: You can have strict rules, like at science sub r/askscience (where they kindly ask that all answers be factual and well-sourced), or make it a free-for-all, such as at r/truereddit, where the only rule is that there are no rules.

Anyone can create a subreddit, and when you do, you become a moderator of that subreddit. You can then invite anyone else you want to to help out and fill up the ranks of your moderating team.

So what do moderators, or mods, do? They can delete posts and comments and ban users from their subreddit. In the cases of larger subreddits, like r/technology, this represents significant influence over the rest of the Internet. These subreddits see hundreds of thousands of visitors a day. So when a moderator removes a popular link for whatever reason, it can mean the loss of serious traffic—and potential advertising revenue—for the destination site.

For many subreddits, a moderator position essentially involves combing through submissions and making sure they follow the rules and aren’t commercial spam. Despite this key role on the self-proclaimed “front page of the Internet,” Reddit moderators remain largely misunderstood, often only coming into the spotlight when they do something wrong, or something controversial, such as removing a popular thread. When redditors get angry, moderators become victims of site-wide witch hunts, as users lash out with nasty and, occasionally, personal attacks.

We wanted to get to know Reddit’s moderators a little better, to pull back the curtain and find out what makes them tick. I interviewed a group of mods on Reddit, asking them a range of questions from the personal to the professional to the Reddit-centric. (Many didn’t want to divulge too much information, considering mods are occasionally victims of harassment.)

We also roped in redditor Sandra Salsbury, aka IllustratingReddit, a professional illustrator who paints Reddit comments. She provided a gorgeous watercolor portrait of each moderator.

Below, you’ll a cross-section of Reddit’s moderator population. Some of the people we spoke to are power mods, with huge influence across the site, and others have more humble power, with just one or two subreddits to their name.

But they’re all real people, who have real passion for their largely thankless job—which just so happens to keep their favorite website running. 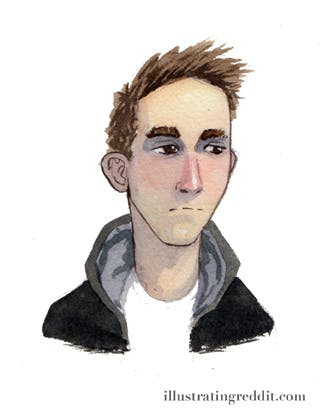 BritishEnglishPolice began his Reddit life by “policing English”—acting as a friendly grammar cop who ushered his victims to a charity’s website after correcting them. The U.K. undergrad has gone on to become one of the site’s top moderators, holding sway over a combined readership of 22 million subscribers, making him the No. 2 moderator sitewide. Why? “I’m stubborn,” he said. “I can’t let places decay; I hate natural entropy (being a science student, it’s hard).”

He’s been a big part of Reddit’s rules revamps, including the one at r/pics that saw the subreddit change from a dumping ground for visual fluff to a quality subreddit full of great images.

“He’s very dedicated,” fellow mod BlueGoddess said. “He’s a good person to work with because he takes the task seriously so you know he’ll take you seriously either as another redditor or a fellow moderator.” 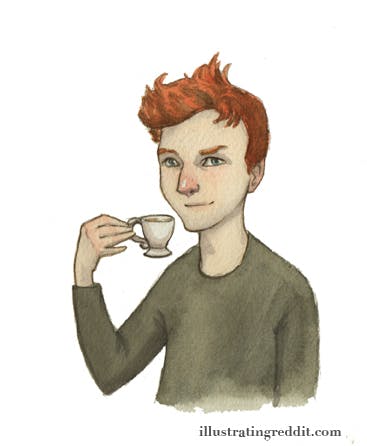 Moderator Ooer chose his name because it’s “the easiest and most simple way to turn any normal sentence into a sexual innuendo,” he said. And he’s right, at least according to Urban Dictionary.

The “management trainee” said his favorite part about Reddit is that “you can ask people to draw you pictures of cats in bow ties riding steampunk helicopters and they will deliver.” What he loves doing most, however, is purging the site of “any and all spam.”  While he’s not the highest-ranking mod on the list, he does reign over some fairly influential sections, including r/WTF and r/AskReddit.

“Ooer’s moderating style is fairly rule-based, and he is very kind and fair to the other redditors and other moderators,” offered colleague BlueGoddess. “He is a good person to work with because he always has your back as a fellow moderator.”  As for that name? “It does not seem to have been a hit with the ladies thus far,” Ooer said. 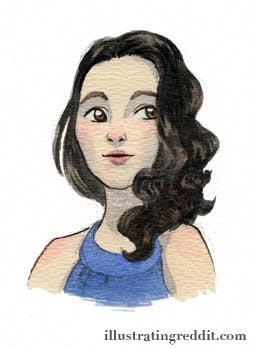 A 21-year-old assistant librarian, BlueGoddess joined Reddit after she told some of her friends she’d landed on Digg following some googling. “They were horrified,” she recalled. “‘Go to Reddit instead,” they told her. Now she patrols the corridors of Reddit’s famous question-and-answer subreddit, r/IamA, politely cleaning up messes left by redditors who don’t follow the rules.

“Users don’t realize moderators are volunteers,” she said. “And some of us work very hard to make Reddit really great or as great as possible. I wish they knew how hard we try.” 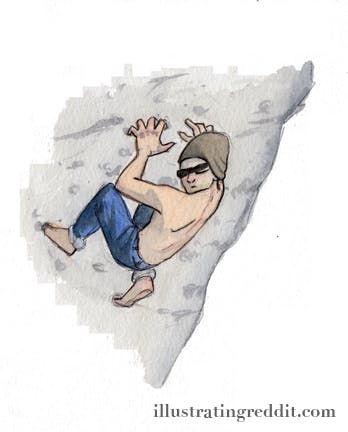 This moderator’s hands are so gloppy with sweat because he spends much of his free time climbing. It’s hardly a surprise then that among SoupyHands’s favorite subreddits to moderate is r/climbing. “Climbers like to argue and nitpick details,” he wrote. “But there is a distinct sense of community.”

The group there has started venturing out into offline meetups: “You might think meeting people that you have previously only been in contact with through reddit to be awkward,” he said. “But so far as I have seen with the r/climbing community, it’s been really fun.”

Moderating pal kjonesol added: “Soupy is one of the few people who can consistently do this job. He might make some mistakes but he’ll be the first to admit it when he does–and he doesn’t let them slow him down.” 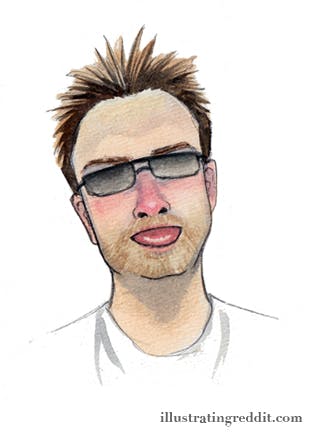 Moderator Raerth said he joined Reddit four years ago to “downvote pun threads,” but he’s since gone on to be one of the busiest moderators on the site, ranking No. 12 by number of subscribers. Raerth said he spends “more time than I should” on Reddit and has a simple but important recommendation for newbies:

“More people should explore the variety of different communities on Reddit, and even create their own. Reddit isn’t just the ‘funny pics place.’”

His favorite subreddits? The home for Game of Thrones on Reddit, r/asoiaf; r/artisanvideos, where tradesman share craft secrets; and r/LV426, the subreddit for discussing the Alien franchise. 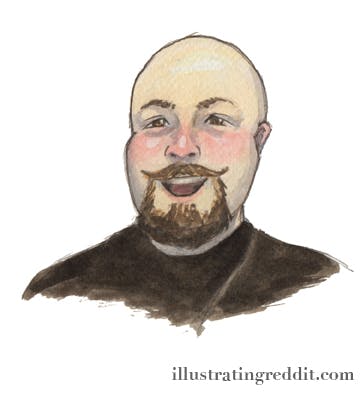 Like many of Reddit’s moderators, Avertr is a migrant. The 33-year-old telecom engineer arrived via legendary Web community Fark two years ago. At Fark, he said, influential users had too much power over content that hit the front page. “[On Reddit] there is a much higher chance of submitted items being seen by the community at large for everyone rather than just a group of power users who got greenlights with regularity.” He moderates, he said, because “I like making a things suck a little less than they would otherwise.” 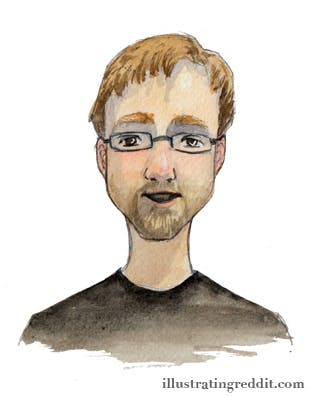 Aperson, a 24-year-old who “stocks shelves at a well-known toy store,” spends up to five hours a day on Reddit, where he’s either moderating gaming communities like r/Minecraft or perusing up discussions in his favorite reads, r/Games, r/Linux, and r/3ds. A Digg refugee who came because he got tired of having difficulty reaching the front page, he’s got a simple solution for some of the user-moderator fights that have a habit of flaring up on Reddit: Communicate.

“I really wish people would modmail us more when they have issues. I’ll see discussion about a subreddit I moderate in a place like r/SubredditDrama or buried in the subreddit itself. Well, what can we do about it if you don’t tell us? If we all worked together more, we’d have a nicer place for everyone to be.”

For kjoneslol, the best part of being a mod is watching a community grow. “It’s great to see people sharing their interests,” he said. Only five people moderator more subreddits than kjoneslol, but the 21-year-old undergraduate moderates for pretty simple reasons.

“With the exception of a few subreddits where I’m just a janitor, it’s because they are things that I am interested in and most subreddits need the help.”

Fellow mod SoupyHands called kjoneslol a “complete package moderator,” noting his deftness at styling CSS, handling subscriber disputes, and for juggling responsibilities. “Although we have long theorized that he is an android,” SoupyHands wrote, “to me he is the best example of a redditor that I have seen yet, and I know I have learned a ton by working with him.” He may be a hard worker, but he doesn’t take his duties too seriously. Just look at his username, for example. It stands for “keep joking or nobody ever sees life or love,” he says. “Deep…right?” 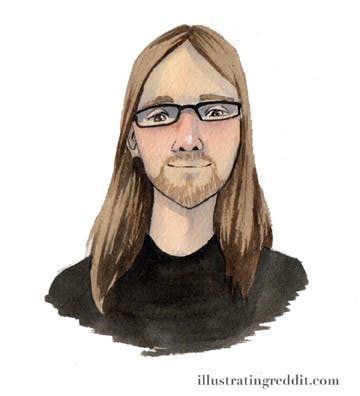 Skuld doesn’t usually like to write about himself. His age, he told me, is “young,” but you can excuse him for his brevity. He moderates 44 subreddits and more than 5 million combined subscribers—all in his free time. “I won’t be far from a Reddit browser window in the evenings,” the IT professional said. He’s a 2008 refugee from tech news community Slashdot, which he said was becoming dominated by “fluff” pieces instead of good articles:

“I have a clear vision of what a good subreddit should be fresh and interesting, and often try to change something if it starts to become too repetitive. I remember how Reddit used to be, and I try to keep my subreddits closer to that than mob rule.”

What’s the best part of moderating? “The good feeling you get from helping your favorite website, and the occasional message from users reassuring you’re that you’re doing the right thing.” 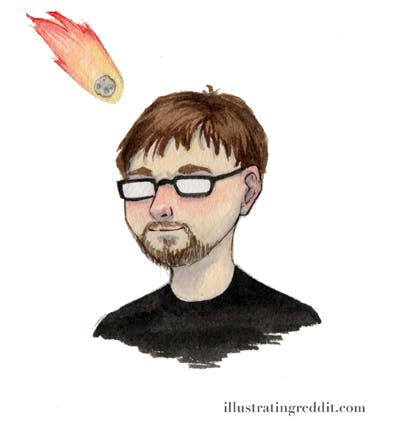 He’s also often brought in by other mod teams to help institute rule changes and lay down the law. How does he manage? “I don’t separate casual redditing from moderation,” he wrote. “I perform my moderation duties as I browse Reddit for entertainment.

“My wife and I don’t bring home much money, and we have a baby girl, so any time I can have fun without spending anything is a good thing.”