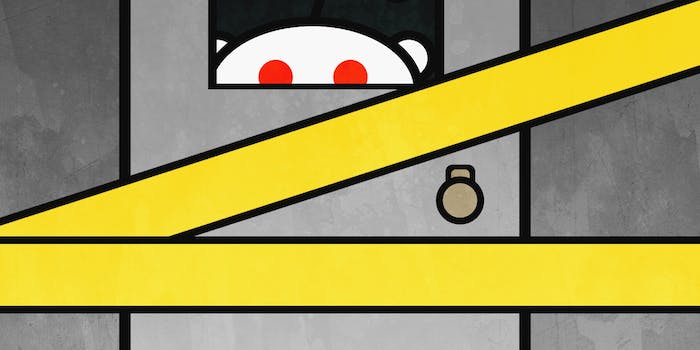 A quarantine is Reddit's version of purgatory.

Reddit administrators have quarantined r/candidfashionfpolice, a controversial forum that featured suggestive photos of women, most of which were likely taken without the person’s knowledge or permission.

A quarantine is Reddit’s version of purgatory, a new form of punishment that is not an outright ban but is considered a kiss of death for most communities because of the rules forced on the forums. Quarantined subreddits are those Reddit administrators believe have “content to be extremely offensive or upsetting to the average redditor.”

The three-year-old r/candidfashionpolice, which had more than 66,000 followers, was formally quarantined by Reddit after the Daily Dot began sending messages to administrators in October. The inquiries stemmed from comments made by Reddit cofounder Steve Huffman in July regarding Reddit’s content and what warranted a subreddit ban.

“While we didn’t create reddit to be a bastion of free speech, the concept is important to us,” Huffman wrote. “/r/creepshots forced us to confront these issues in a way we hadn’t done before. Although I wasn’t at Reddit at the time, I agree with their decision to ban those communities. The main things we need to implement is the other type of NSFW classification, which isn’t too difficult.”

The Daily Dot also reached out to cofounder Alexis Ohanian regarding r/candidfashionpolice. Those messages were never answered.

On Nov. 16,  Reddit’s Ashley Dawkins began conversations with Huffman and the company’s head of community in response to the comment request. Monday afternoon, the Daily Dot received this response:

“Reddit has actually made https://www.reddit.com/r/candidfashionpolice quarantined. In an effort to maintain a community that is both reflective of our users interests and reflective of the policies we have set in place, we feel that quarantining the community was necessary and inline with our regulative content language.” 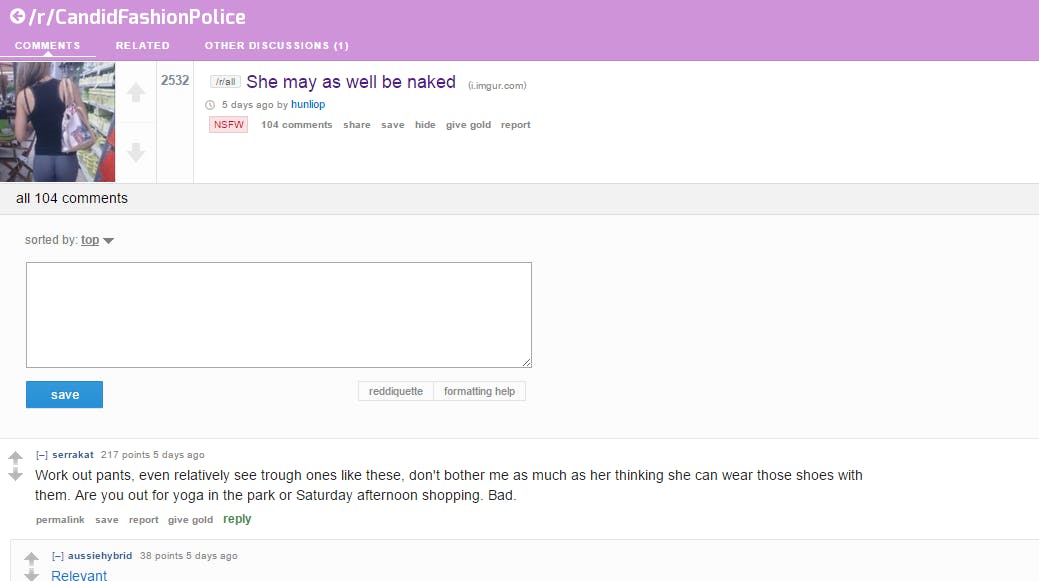 The gimmick that seemingly allowed r/candidfashionpolice to exist for so long was this idea that the subreddit was “a fashion critique community run by passionate fashionistas,” as it once stated in the subreddit sidebar.

In 2014, Jezebel writer Erin Gloria Ryan called attention to the subreddit. “Like herpes and harem pants, Creepshots just keeps coming back,” she wrote. “This time, it’s in the form of a fake ‘fashion police’ forum that barely attempts to disguise the fact that it relies on the same tactics and features the same content that got its predecessor banned.”

The news of the quarantine has not gone over well with the Reddit community.

Over the past two days, r/candidfashionpolice patrons have aired their grievances on a thread in a separate subreddit. Some have brought up the fact that NSFW subreddits such as r/Bestialityy (6,775 subscribers) r/incest (55,923), and r/BDSM (59,394) are still up.

In August, Reddit administrators created the category of “quarantined” subreddits, which are only accessible to redditors who opt into being able to see them.

“We will quarantine communities whose content would be considered extremely offensive to the average redditor,” wrote Huffman on Aug. 5.

This is an important distinction because a quarantined subreddit is not the same as one that’s been banned, such as r/creepshots. A quarantined subreddit can become visible to the masses so long as it follows the restrictions laid out on Reddit’s help desk. One example is r/gore, which features a splash page warning visitors of what is to come.

The Daily Dot has reached out to Dawkins for further comment on the r/candidfashionpolice quarantine and will update this story as we learn more.

“CFP [r/candidfashionpolice] was not taken down because it contained NSFW content. It was quarantined because it consisted of content dedicated to photos of people in public in order to sexualize them, better known as ‘creep shots.'”

Editor’s note: This story has been updated to correct a quote provided by Reddit administrator Ashley Dawkins.