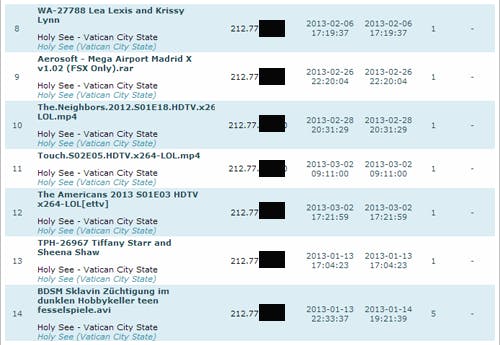 I have always identified as a Transsexual Woman and got into porn to be able to express my open views of sex.  I consider myself bi-sexual but really enjoy women and other transsexual women.  My scene with Sheena Shaw was steamy, affectionate and raunchy so I can see why whomever at the Vatican watched picked us.  Porn isn’t as taboo as many people try and make it out to be.  For someone to know what they enjoy and pleases them isn’t taboo but a great form of self expression.  I am sure Christians feel it was sinful as part of their morals but I think its great that this person was taking time to enjoy himself.  What I don’t agree with is downloading it from a tube site.  Tube Sites steal the work of producers and stars who work and spend money to produce them only to have them illegally downloaded from a site, thus “thou shall not steal”.  So as much as I am pleased that he enjoys my body of work, no pun attended, I wish it was done the correct way.  So with that being said I must show my compassion and charity work and if  the person himself wants to email me [email protected] then I would be happy to send him a free autographed DVD and a personal thank you.