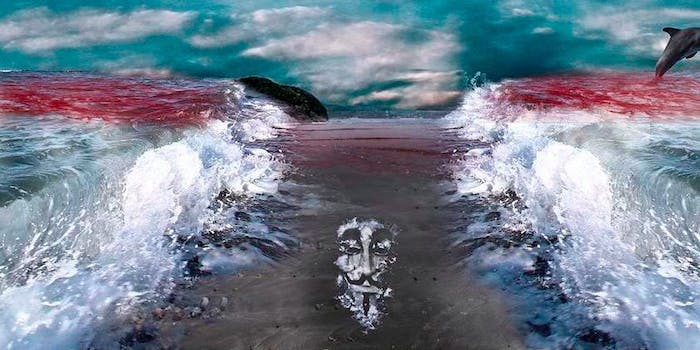 The hacktivist collective Anonymous has defended bullying victims, teens arrested for kissing, and even abused kittens—and now it’s turning its attention to another group in need: dolphins.

Anonymous has declared open season on the dolphin hunters of Taiji, Japan in an operation called #OpKillingBay, joining forces with a global protest movement.

“Government of Japan, we have been watching you and your sick actions from a very long time. Despite several pleas from the international community, you have not stopped butchering these mammals, for your personal gains. You are putting your people’s lives at risk by allowing them to consume whale meat. Not only that, you have brought great shame upon Japan by performing these acts.”

As detailed in the Oscar-winning documentary The Cove, Taiji Cove is the home of a dolphin hunt from September to April, with pods of dolphins driven in with small boats, then trapped and picked off one by one. For the past several years, the hunt has been monitored by protesters and observers, including supporters of the Sea Shepherd Society.

The annual death toll has been estimated at 17,000 dolphins, despite the fact that the meat has been tested and found to be extremely high in the poisonous heavy metal mercury. Recent reports say that the kill has significantly declined in the face of lessened consumer demand.

The current, government-mandated method of killing by driving a spike through the spine at the base of the neck is less gory than the traditional method of severing the throat and leaving the mammal to bleed out into the water, but it is no less fatal.

Some dolphins are not slaughtered, but are sold to sea life attractions such as Sea World, which is how Sea World became a target of #OpKillingBay. Anonymous claimed to have hacked the famous tourist destination and leaked a financial report.

That’s a bit of old-style Anonymous bluster; the financial report was not stolen, but is freely available on Sea World’s own corporate site. Not that hacks haven’t surfaced. The Tokyo Times reported that Anonymous claimed credit for having hacked “the prime minister’s office, Taiji, Wakayama Prefecture, the Ministry of Agriculture, Forestry and Fisheries, and the Ministry of Internal Affairs and Communications,” taking their sites offline or defacing them with a warning message. Anonymous claimed to have 22 government sites on its hit list.

Hacks or no hacks, OpKillingBay does not officially launch until December 1, according to the Pastebin document that announced it.

In the meantime, another operation has sprung up: a non-Anonymous tweetstorm for the hashtag #JapanDolphinKiller, which took place November 20. It racked up more than 1,600 tweets throughout the day, including some calling for a boycott of the 2020 Olympic Games, to be held in Japan.

OpKillingBay’s press release doesn’t give much information, saying only that volunteers are needed and that there will be DDoS attacks and “cyber attacks,” although it’s not clear whether the latter are limited to DDoS or include actual hacks, leaks, infections and defaces. The tweetstorm is called for 1pm on December 1, although no time zone is specified, so the tweets will roll across the world. The Facebook event has only 55 attendees so far, and directs non-hacker types to the WordPress site Call of the Cove for ways to contribute. Ric O’Barry’s Dolphin Project Facebook page, in contrast, has over 69,000 likes.

As detailed, and mocked, on media sites around the world, Taiji has recently announced a novel PR effort: The town plans to open a dolphin petting zoo and theme park where people can swim with the dolphins and later dine on dolphin meat. The mayor told the Daily Yomiuri, “We see the unfavorable circumstances as our opportunity to promote our town because we have co-existed with whales for generations. We will turn Taiji into a national park and museum with a whale theme.”

According to Al Jazeera, the Japanese government maintains the dolphins are captured only for “research,” although it declines to explain how they frequently end up in supermarkets and on restaurant menus.