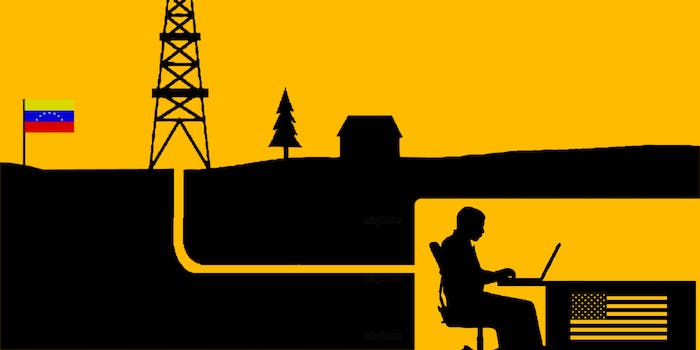 How the NSA uses PRISM in Latin America

The system has been used to track "energy and narcotics" transactions in Mexico, and "data on oil and military purchases from Venezuela."

The NSA reportedly used its Internet spy program to keep tabs on military, oil, and drug transactions in Latin America.

That’s according to a report co-written by Guardian journalist Glenn Greenwald in the Portguese-language paper O Globo. Greenwald has broken a number of recent NSA spying stories after former NSA contractor Edward Snowden passed him documents that detail the agency’s’ practices. Though Snowden’s not mentioned in the O Globo report, Greenwald has access to a PowerPoint presentation that details how PRISM works, and the majority of its 41 slides are still unknown to the public.

We know from the slides that have been released that PRISM is a means for the NSA to tap American companies like Google, Facebook, Apple, and Microsoft for foreign users’ communications. According to the FBI, national intelligence agencies are able to do this legally, thanks to section 702 of the Foreign Intelligence Surveillance Act (FISA).

O Globo‘s report claims the NSA used PRISM to track non-terrorist activity in two countries from February 2-8. Those were “energy and narcotics” transactions in Mexico, and “data on oil and military purchases from Venezuela.”

Venezuela, as it happens, is likely to be Snowden’s home soon; he applied for asylum there Monday. He’s believed to still be stuck in the international zone of a Moscow airport after the U.S. revoked his passport.

The NSA also reportedly tracked Colombia’s Revolutionary Forces of Colombia (FARC), which the U.S. State Department has considered a terrorist organization since 1997.

That’s far from the extent of the NSA’s surveillance in Latin America. O Globo also reports that, under the NSA’s Boundless Informant program, it partners with Latin American telecommunication companies to track the metadata of people’s phone calls and Internet use. This evokes a similar program in the U.S., where the NSA gets a record of every Verizon phone call made in America.

In response, Brazil has already opened an investigation into U.S. spying.

The U.S. hasn’t denied the claims. While she refused to go into details, State Department spokeswoman Jen Psaki stated to reporters that “we have been clear that the United States does gather foreign intelligence of the type gathered by all nations.”