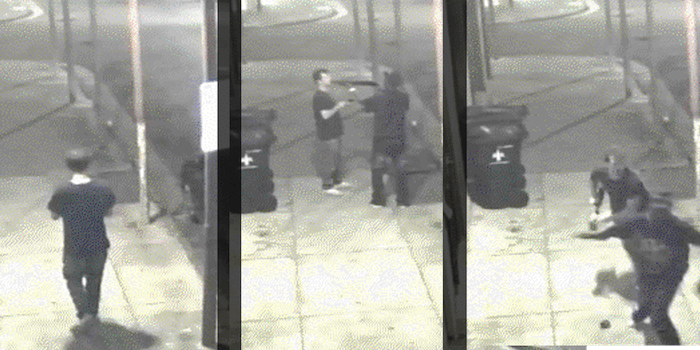 The Morning GIF: Turning the tables on crime in New Orleans

You won't believe the quick thinking from this guy facing the business end of a shotgun.

Maybe it was New Orleans’s disturbing amount of gun crime or maybe he was just having a bad day.

But on Saturday night, when a man talking on his phone was held at gunpoint on the 1900 block of Burgundy Street, he refused to become another statistic.

The man, who has not been identified, stared down the barrel of the shotgun, dropped his phone, and took the firearm from his assailant in one swift motion.

The entire incident was caught on video, which New Orleans police released to The Times-Picayune. The following GIF was created using that video and posted on Reddit, where it has collected more than 1,100 comments from people praising the victim’s courage.

“This guy has single handedly done more to fight crime in this city than the idiot police chief Ronal Serpas has in the entire time he’s been down here,” jeseiler commented. “There are murders almost every single day. Recently a few toddlers and two elderly women were among gunshot victims. The people are sick of it. In conclusion: This guy’s balls?… They are made of steel.”

After obtaining the assailant’s shotgun, the man was approached by two men in a car who offered to return the phone the man had dropped in exchange for the gun. The man refused and instead used the butt of the gun to smash the car’s rear windows before it sped away, the Picayune added.

Police are still searching for the assailant, who is believed to be connected with another stick-up a week ago.