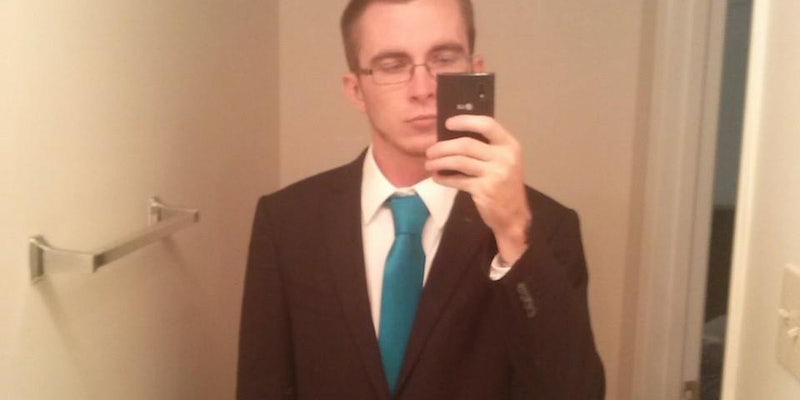 The scourge of Steubenville speaks out about Daisy Coleman's fight in Maryville, Mo.

Deric Lostutter, a.k.a. KYAnonymous, is the face of the faceless hivemind. He’s the founder of #OpRollRedRoll, which brought the Steubenville rape case into the public eye. Since Barrett Brown’s been locked up, Lostutter has been Anonymous’s point man for the media, who always prefer to put a face to a story.

We contacted him for an interview about his involvement with #OpMaryville and #Justice4Daisy, the case of a 14-year-old Missouri girl who was allegedly raped, bullied, and run out of town.

Lostutter was careful to specify that he is not “in the loop” on this operation; he’s simply using his media platform (Facebook, Twitter) to support and amplify the message that others in Anonymous are working on, such as the tweetstorm and video. He’s using his reach with the mainstream media to get out the message of just exactly what happened to Daisy Coleman back in January. Unlike the Steubenville operation, in this case Lostutter repeatedly reminds people to stay legal, using only publicly available information and no hacks.

Given that Daisy Coleman and her mother were interviewed on CNN last night, and so far no Anons have been arrested, it seems that the collective is becoming more effective at these kinds of operations. After Steubenville, of course, Lostutter was famously raided by the FBI, and later suffered panic attacks that sent him to the hospital.

We spoke to him by phone this morning.

So, how did you find out about this case? How did you get involved? Are you officially a part of the op?

I came across a story, somebody linked it to me, in the Daily Mail. And I was like, Holy shit, this is crazy. So I posted it on Facebook on Saturday. This shit needs to stop. [But] let’s approach it legally, completely different from how Steubenville was handled. That way there’s less collateral damage and more action and progress.

Since that post, it’s kind of [gone] like wildfire, due to a lot of people bringing it in and supporting. The @YourAnonNews account tweeted about it, and of course that pretty much locked it in on the Internet right there. They have over a million followers now. They were organizing Occupy Maryville on October 22 and I put the date of that on Facebook and on Twitter too, a little later.

But that’s mainly how we’re going to handle it. How I’m asking people to handle it is protesting, legal protesting, and peaceful protesting. Asking all the right questions. Massive media investigation, media pressure, to get a grand jury to investigate, just like the grand jury investigated in Steubenville and is getting results, like the first indictment just came down on the IT director. We want to see that happen in Maryville too.

What’s happening there is just garbage. With the sheriff saying “Get over it” and stuff like that to the public, what the hell is he thinking? Does he not know what happened all this past year? I don’t know.

I have support for the op, and I’m promoting the op, and offering my input on the op. As far as hacking and stuff goes, no, I’m not partaking in any of that, if that even is going to go down. I have no idea. I’m not in the loop as far as that goes. I’m just being very public with the protest side of things and calling for investigations into their representative [Barnett’s grandfather], Barnett’s father, and into their sheriffs and prosecutors.

The point of me calling for Anonymous involvement is … we just want to let them know that you can’t raid people just because they stuck up for a victim and expect them to sit down. I’m not gonna sit down. I’m sure the rest of the Internet’s not going to sit down either. The next time they raid me they’re gonna have to politely ask me to get off my couch, because the surprise factor’s gone, and I’m not gonna shut my mouth when this shit’s going on elsewhere. There’s work to be done nationwide, as I’ve been preaching all along. It’s not just Steubenville; this shit happens all over, and it’s garbage.

We need to make this a safer place for our daughters to be raised. My new girl has a 2-year-old daughter and I’ve come to appreciate and care for her, and if something ever happened like that to her, computers would be the last of the person’s worries.

Correction: An original version of this article stated KYAnonymous was a leader of #OpMaryville. We regret the error.