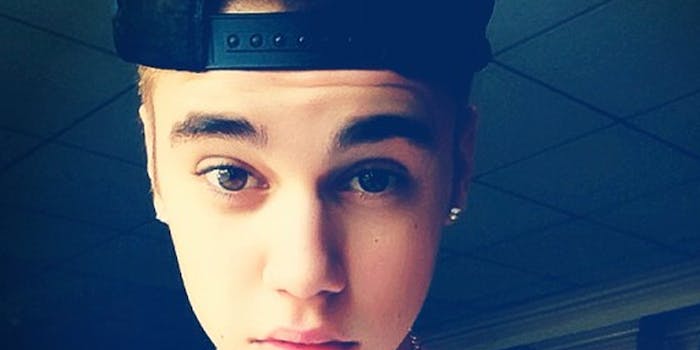 Bieber mooned the photo-sharing site, but his prank photo wasn't up for long.

On Saturday, the 18-year-old star dropped trou and posted a picture of his bare Canadian butt to his 6 million followers on Instagram. The moon shot landed 100,000 likes before it was taken down and prompted a response from his manager, Scooter Braun.

“as a prankster u have to respect another good prank. only makes sense. #crackdealer,” tweeted Braun suggesting the picture was a joke. Some are speculating that it’s a publicity ploy by Bieber for his new acoustic album, scheduled to be released Jan. 29, but if the full-moon photo is an attempt to shock Bieber fans, it’s way tamer than the horrific #cutforbieber campaign engineered by 4chan earlier this month.

Bieber’s pictures regularly rack up hundreds of thousands of likes no matter how mundane the image is, thus not making this—surprisingly—one of his most-liked photos. A picture of Bieber and his on-and-off girlfriend Selena Gomez received 149,000 likes, but his recent uploads regularly earn three to four times that. A selfie he took last week earned 600,000 likes.

However, his joke was a clear violation of the Facebook-owned service’s rules. On the Community Guidelines page, there’s a dictation that no nudity is permitted to keep the app “in line with [Apple’s] App Store’s rating for nudity and mature content.”