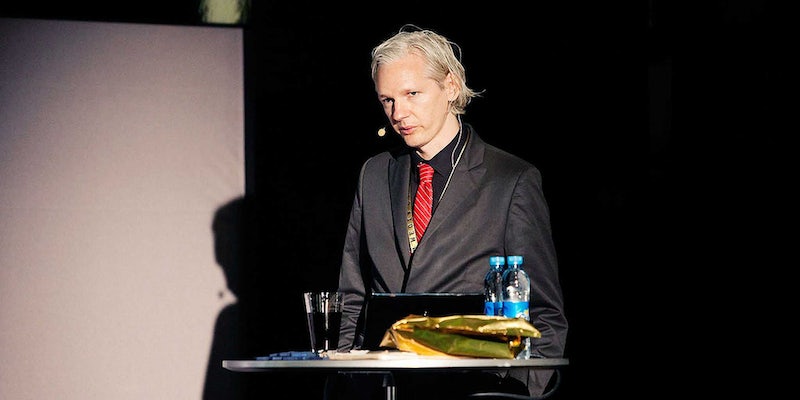 Currently living in exile in the Ecuadorian embessy in London, Julian Assange addressed SXSW via Skype.

Speaking to a crowd at South by Southwest Interactive via Skype, Wikileaks founder Julian Assange spoke at length on the topic of surveillance. People gathered at the Austin convention center to witness a livestream of his talk, broadcast from the Ecuadorian embassy in London.

Assange poked at the U.S. National Security Agency, who he said was in no way prepared for the leaks released by former intelligence contractor Edward Snowden. “We got lucky, because we ended up with an opponent that didn’t have a PR strategy.”

National security reporters constitute a new class of political refugee, according to Assange, referring to Glenn Greenwald, Sarah Harrison, Laura Poitras, and Jacob Appelbaum as examples. Greenwald, who is teleconferencing into SXSW this monday, lives in Brazil. Harrison, Poitras, and Appelbaum all currently reside in Berlin. In the past, each has publicly expressed outrage over how they’ve handled been by authorities, particularly at airports, where Poitras, for example, reports frequently being detained and interrogated.

Assange attributed the persecution of journalists to the rising awareness of the global surveillance state. “We are all part of the state,” he told the crowd, “We have no choice but to attempt to manage it.”

Assange also applauded Greenwald’s new media venture, First Look Media, backed by billionaire Pierre Omidyar. “Omidyar has seen there is not liberty even for someone who has $8 billion,” Assange said, using the Ebay founder as an example of the elite class shocked by what the NSA has gotten away with.

#Assange: We’re a small publisher. We try and test. We do not accept the perception of fear, we push to see what is the reality. #sxsw

Assange addressed his own situation as well, which for the time being remains political exile inside an Ecuadorian embassy. “It is a no man’s land, as far as coercion is concerned,” he said, calling the embassy “every national security reporters dream, which is a land without police.”

Assange confirmed that WikiLeaks has upcoming leaks, but wouldn’t get specific. “We don’t like to give the opponent too much of a heads up.” He added that in 2010 the U.S. Department of Defense demanded that WikiLeaks destroy all current and previous publications. “We said no.”

He went on to quote Nelson Mandela, “Courage is not the absence of fear,” adding, “only a fool has no fear.”