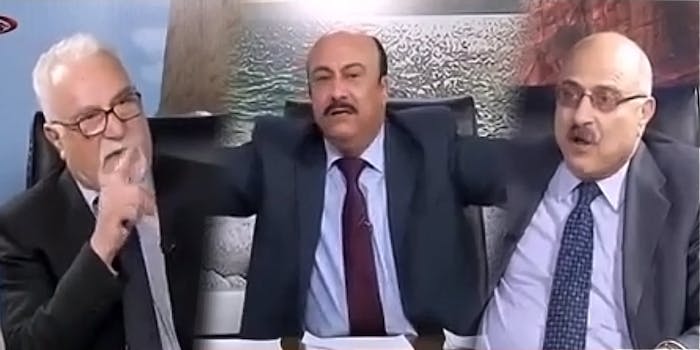 That table never stood a chance.

Television debates can become tense, but rarely do they come to physical blows. One panel on the Jordanian Channel 7 Stars descended into chaos as the guests on a show unsurprisingly called Between Opposing Opinions began to tear apart the studio in a brawl. Debating the delicate issue of the Syrian Civil War.

It all kicked off when guest Mohammed Al-Jayousi accused fellow journalist Shaker Al-Johari of being ‘deviant’ and for apparently supporting the revolutionaries in Syria, in response, Al-Johari accused Al-Jayousi of supporting the Assad regime in return for cash. Then things got a little bit out of hand, and the guests began to move the set’s table-top, resulting in the fragile studio being destroyed. Eventually the show’s producers came into the fray to separate the guests.

According to Reuters, no action has been taken against the men.