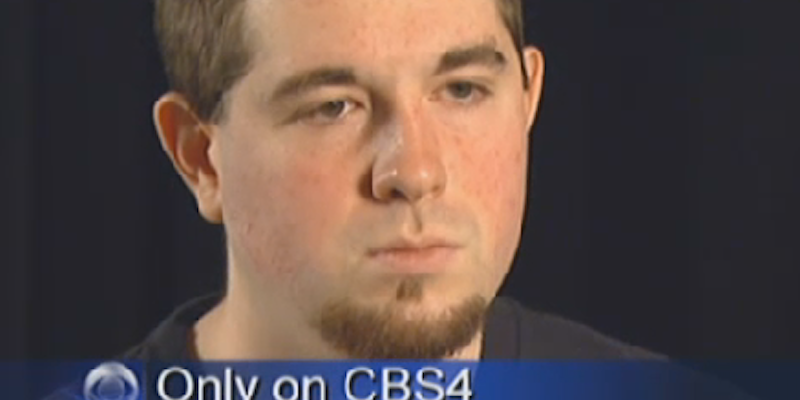 A new interview with Denver's CBS4 TV sheds light on Craig Brittain, the 28-year-old who publishes private photos of unknowing strangers and charging those strangers $250 for removal.

New information is starting to emerge about the man behind IsAnybodyDown, the revenge-porn website that’s quickly turning into one of the most reviled destinations on the Web.

According to an interview conducted by Denver’s CBS4 TV, Colorado Springs, Colo., native Craig Brittain is a 28-year-old lifelong professional failure who’s sent “thousands of applications” to potential employers in hopes that he could flip burgers or fold T-shirts or manage an office or do anything before he finally settled on creating a website that publishes private photos of unknowing strangers and charging those strangers $250 for removal. (The unfamiliar should think of it as a remodeling of Hunter Moore’s infamous IsAnyoneUp with a caveat rooted in alleged extortion.)

Through advertising sales, Brittain says he’s managed to make roughly $3,000 off the site every month, but he certainly has his haters.

Many of those come in the form of individuals who have been victimized by the existence of IsAnybodyDown, a site that’s protected under the Communications Decency Act, which protects site owners from legal action based on what its users submit. They’ve told CBS4’s Brian Maass that they were “disgusted by the whole thing,” that it made them “throw up,” and that their presence on the site has “nothing to do with free will.”

“Those were my personal photos reserved for me privately and somehow they were taken and now they are all over the Internet for anyone to see,” one said. “It’s an invasion of privacy and it’s disgusting.”

But Brittain doesn’t see things that way. Rather, he says that his website’s working to help those that have become victims.

“I think we’re not doing anything to hurt them” he told Maass.

“We’re  not trying to hurt them. We’re not trying for revenge or any sort of malicious thing. We don’t want them hurt. We just want their money.”

“There’s are plenty of websites of this type,” he said. “We realized that we could make changes and modifications to it that would make it more neutral, more acceptable, more fair. We would be representing the people and their interests.”

Whatever that means. Brittain told Maass last week that he believes the individuals that show up on his site want their private shots to become public. They’re asking for it, he said. IAD is simply the facility.

“They’ll send emails [containing their private photos] to 20-30 people like it’s nothing,” he said.

“They’ll send the same pictures to everyone. They won’t run any background checks of who they’re sending their pictures to. In turn, a lot of those people will send those pictures to us.”

And then they’ll stay onsite until the victim gets in touch with a New York-based attorney named David Blade, an “independent third party” who runs a site called Takedown Hammer, which promises “100 percent guaranteed success” when it comes to taking down IAD entries. The main issue is that each takedown costs $250.

The other issue, of course, is that there’s a strong belief that Blade is not an actual person but rather a front established by Brittain to make money off these photographs.

Takedown Hammer’s WordPress website offers no method of contacting anybody within the company outside of a single email address: [email protected], and the website lists no name.

Good luck getting in touch with David Blade.

CBS4’s entire 54-minute conversation with Craig Brittain airs below. He’s unsurprisingly guarded and unwilling to provide detailed information into what’s happening with his website, but he repeatedly attests that he’s doing the Internet a favor.

“I call it entertainment,” he said. He’s “absolutely” proud.