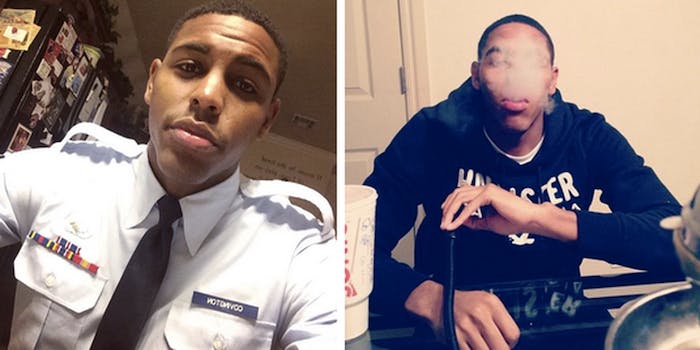 A thought experiment reveals the depths of journalistic bias.

As the Federal Bureau of Investigation announced it would investigate the death of unarmed 18-year-old Michael Brown, killed by police gunfire in suburban St. Louis on Saturday night, Twitter users began to criticize mainstream media’s biased coverage of the story thus far.

Aside from shifting focus to the riots and looting that followed the shooting in Ferguson, Mo., readers said, journalists made Brown another victim of what the Root labeled “the Trayvon Martin effect,” running only the photos from his social media accounts that suggest a thuggish nature. This led to the hashtag #IfTheyGunnedMeDown, which minorities used to ponder how they would be portrayed if murdered by law enforcement (or the next George Zimmerman):

#IfTheyGunnedMeDown would I be seen as gang affiliated or a leader in education ? pic.twitter.com/SdOrKA1Mhh

#IfTheyGunnedMeDown hashtag says it all, for the consistent injustice against black people in AmeriKKKa. #MikeBrown pic.twitter.com/brLMVZqVjT

#IfTheyGunnedMeDown I have a feeling I know what picture they’d use. pic.twitter.com/A0eUvBqoUP

#IfTheyGunnedMeDown which pic would they use on the news???? pic.twitter.com/lPUVtIHN0E

#IfTheyGunnedMeDown am I urban or a bright young man pic.twitter.com/P2Zibk7IpM

I Came across this young lady a couple months ago on IG. Don’t judge a book by its cover #IfTheyGunnedMeDown 🚶 pic.twitter.com/qJyn44XeXm

#IfTheyGunnedMeDown, and I was unarmed, what picture would the media use to create a racialized bias? pic.twitter.com/AolLMfiOJV

Rage over the apparently senseless killing is hardly limited to this corner of the Internet: The hacktivist collective Anonymous launched #OpFerguson, an attack that echoes the group’s involvement in exposing the municipal cover-up of a 2012 rape in Steubenville, Ohio.

Confirmed: Anonymous group hacked into the City of #Ferguson website last night. All city emails are down.

Ferguson police officials say Brown attempted to grab an officer’s gun before reportedly running from a patrole vehicle with his hands in the air. The officer who shot Brown is currently on paid administrative leave.