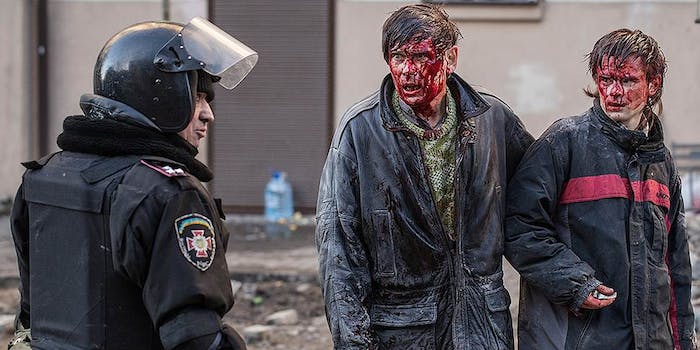 Behind the most powerful protest photo of the year

“This is the kind of photograph that ends up in history books for decades to come.”

A disheveled Ukrainian man and his son walk in the streets of Kiev, a protest site for the past four months. Both their faces are drenched in blood. They’ve come across a Ukrainian soldier or police officer dressed in riot gear. Reuters freelancer Vlad Sodel snapped the photo as the man and his son exchange glances.

I can’t stop returning to this image from #Kiev earlier today. What words were exchanged? Photo by Vlad Sodel/Reuters pic.twitter.com/EcKJemw7ef

“This is the kind of photograph that ends up in history books for decades to come,” Reddit user landcaster1983 commented.

Since Sodel uploaded the photo to his Facebook Tuesday, viewers across social media have one question: Who are they?

Professor of the Natl Academy of Sciences Mikhail Kuznetsov (R), one of the many injured in Kiev on Tue. Photo: AFP pic.twitter.com/AqzPSqy95Q

Stellar sleuthing by Reddit and Twitter users has turned up the name Mykola Kuznetsov, a professor at the National Academy of Sciences of Ukraine. It is unclear whether Kuznetsov and his son were involved in the protests against President Viktor Yanukovich or just walking down the street minding their own business. Either way, their injuries and the look of utter despair on their faces captures what millions of Ukrainians have been feeling since November.

Social media has played an instrumental role in rallying protesters and disseminating footage of police violence.

On Wednesday, a brief truce was negotiated between the government and protesters. That was quickly “shattered” following more violence in the Ukrainian capital, which included 21 protester deaths by sniper attack.

Amidst the chaos, Kuznetsov and his son were captured on video being tended to by medics sometime after Sobel’s iconic photograph was taken. They can both be seen at 00:40 in the clip.