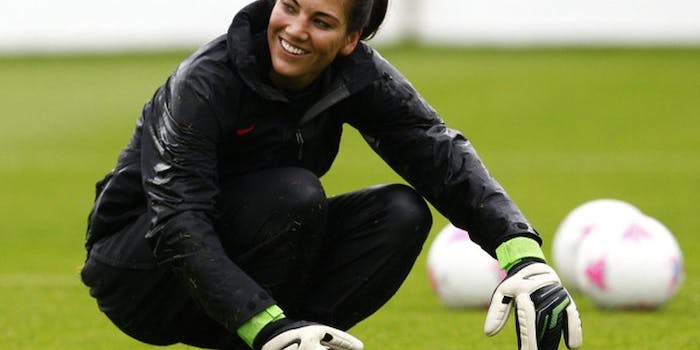 On a day when the  International Olympic Committee (IOC) had its hands full with various Twitter-related problems, U.S. Women’s Soccer goalkeeper Hope Solo caused another Twitter controversy when she criticized an NBC broadcaster’s coverage of the team.

The U.S. Women’s Soccer team beat rival Colombia on Saturday, which gained them an automatic spot in the quarterfinals, but the victory was not without critique from broadcasters. Solo, known for being outspoken, took to Twitter to address comments made by former national player Brandi Chastain about defender Rachel Buehler, according to the New York Times.

“Its 2 bad we cant have commentators who better represents the team&knows more about the game @brandichastain!” Solo tweeted.

“Lay off commentating about defending and [goalkeeping] until you get more educated @brandichastain the game has changed from a decade ago,” she continued.

Solo had a meeting with U.S. Women’s Soccer coach Pia Sundhage as well as captains Abby Wambach and Christie Rampone this past Sunday to discuss unifying the team during the Games. Solo is not being punished by the team for her tweets.

Chastain responded on Sunday during a media event in Birmingham where she defended her work as a commentator.

“I’m here to do my job, which is to be an honest and objective analyst at the Olympics,” she told reporters.

Solo hasn’t acknowledged Chastain’s response, instead choosing to focus on practicing for the match tomorrow against North Korea and thanking well-wishers for wishing her a happy birthday.

The IOC—which has already expelled a Greek Olympian for a racist tweet and sent a Swiss soccer player home for a similar incident—did not get involved with Solo’s Twitter controversy.