Future Sex: Steubenville and rape in the digital age

The Steubenville case marked a turning point for social media, which not only was used as evidence in the trial but helped spur a call for justice. The Steubenville, Ohio, rape trial concluded yesterday. The case, brought to public attention through a New York Times story and the ensuing hack/dox led by Anonymous sub-group Knightsec, captured the attention of the world with its frighteningly horrible allegations backed up by frighteningly horrible social media proof. The alleged sexual assault of a drunken, incoherent sixteen-year-old high school student by at least two football players in Steubenville is, on its own, an incredibly upsetting news story. But this particular incident left a social media trail so callously celebratory of rape-culture as to dishearten anyone with a shred of empathy.

When both young men were found guilty in juvenile court, CNN Breaking News anchor Candy Crowley conducted a baffling interview with their in-court reporter who described her experience watching the verdict as, “Incredibly difficult, even for an outsider like me, to watch what happened as these two young men that had such promising futures, star football players, very good students, literally watched as they believed their lives fell apart…when that sentence came down, [Ma’lik] collapsed in the arms of his attorney…He said to him, ‘My life is over. No one is going to want me now.’” She then went on to underscore the role that alcohol played in the night’s events. She also told a bizarre story about how one of the defendant’s alcoholic father had purportedly told him that he loved him for the first time ever during court proceedings.

Candy then went on to discuss the legal repercussions of the judgment with legal expert Paul Callan, who described how being placed on Ohio’s sex offender registry will haunt the two boys “for the rest of their lives.” To say that this response was misguided is an understatement. In a statement to the media the mother of the young woman, whose name was never made public, aptly noted, “You were your own accuser through social media you chose to publish your criminal conduct on.”

The Steubenville case is perhaps the most famous case in which criminals’ use of social media not only exposed their actions, but also galvanized a public to demand justice.

Soon after the initial public outcry, local blogger Alexandria Goddard took screenshots of this social media trail left by those associated with the crime, then broadcast them to the world. The tweets include jokes about sloppiness, whores, and a link to the youtube video of Nirvana’s “Rape Me.” Later, hacktivists uncovered more evidence in the form of photos, emails, and the infamous 12-minute video of Steubenville grad Michael Nodianos, 18, grinning for the camera, referring to the young woman as, “so raped” and, apparently, other derivations on “so raped.” I wouldn’t know–I couldn’t stomach watching the entire thing.

These pictures, captured and shared on social media, are particularly horrifying, and perhaps reflect an unsettling truth about our current culture, especially that of children who have matured in this technological moment. The act of recording and sharing our lives in the digital world, once confined to celebratory or flattering information, has pushed the boundaries of what we might have imagined possible. We now record everything, no longer striving to project our best selves, but instead a bizarrely fearless record of everything.

Even five years ago, I’m not sure these pictures and tweets would have been shared–not simply because the platforms, as digital spaces, did not yet exist (Twitter and Facebook did)–but because the impulse to communicate through documented actions did not exist in the same way. When engaging with our social media, many of us minimize the reality of who could see our information. We imagine our friends engaging with our content because they are our friends; we do not imagine the vast digital space, filled with anonymous people, who might have access. In this way, the young men of Steubenville glibly broadcast the tale of a sexual assault. They knew the greater public could, in theory, see what they were up to, but they didn’t think we would look. 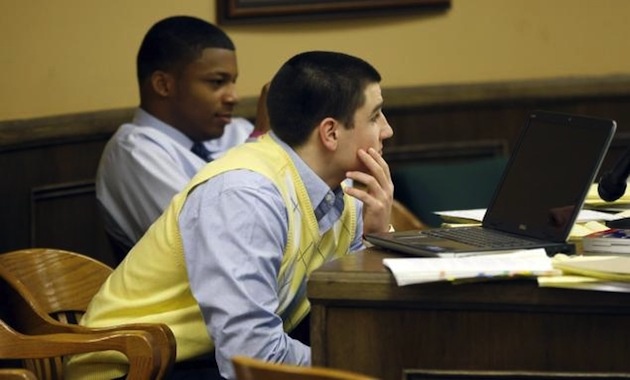 Trent Mays (foreground), 17, and Ma’lik Richmond, 16, each face time in juvenile detention (via)