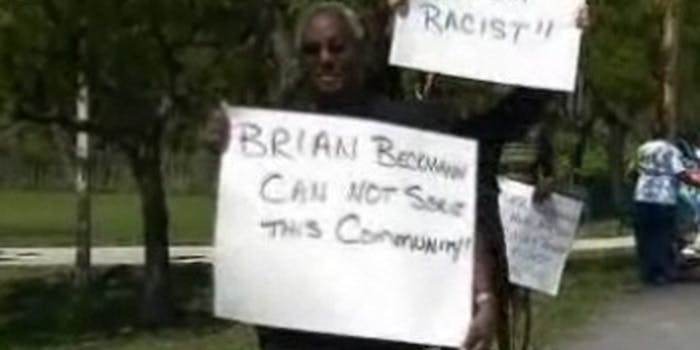 Protestors take to the streets over firefighter’s racist Facebook rant

The investigation is proceeding too slow for some.

Miami-Dade Fire Rescue Capt. Brian Beckmann is being investigated over a rant on his Facebook page related to the Trayvon Martin case that’s gripped the U.S. But some members of the community clearly feel that investigation is taking too long.

As many as 60 Miami citizens took part in a protest Wednesday, claiming that the investigation is dragging, following the comments Beckmann made two weeks ago. The protesters gathered at Miami-Dade Fire Rescue Headquarters in Doral, a Miami suburb.

“The director should come out and speak to the public and apologize for the words of Brian Beckmann,” protester Walter Clark told NBC Miami. “At the same time, Brian Beckmann should be fired.”

The issue has caused consternation in the community over the last couple of weeks. A previous protest demanded that Beckmann be formally reprimanded for his remarks, with calls for the firefighter to be fired.

Beckmann’s Facebook post appeared on the same day it was announced that George Zimmerman would be charged with second-degree murder over Martin’s death.

“Listening to Prosecutor [Angela] Corey blow herself and her staff for five minutes before pre-passing judgment on George Zimmerman. The state seeks reelection again, truth aside,” Beckmann wrote on his own Facebook profile.

“I and my coworkers could rewrite the book on whether our urban youths are victims of racist profiling or products of their failed, shitbag, ignorant, pathetic, welfare dependent excuses for parents, but like Mrs Corey, we speak only the truth. They’re just misunderstood little church going angels and the ghetto hoodie look doesn’t have anything to do with why people wonder if they’re about to get jacked by a thug.”

Miami-Dade Fire Rescue said that the investigation into Beckmann’s comments is ongoing, and that it will “not be rushed into completing this inquiry.” The department’s statement added, “The public is entitled to a thorough fact-finding process, and that is what we will do.”

The investigation is looking into whether any of the county’s policies were violated by Beckmann’s post.

The county has an 11-page social media policy, though there is just one paragraph that relates to expressing personal opinions, notes CBS Miami. It reads, “do it on your own time, make clear that you are speaking from your own point of view.”

The disciplinary action document for the Miami-Dade county states:

“Any employee may be reprimanded, suspended, reduced in grade or dismissed by the head of his department, or designee as approved in Administrative Order 7-16, for any good and sufficient reason which will promote the efficiency of the County service. Negligence, dishonesty, insubordination, or conduct unbecoming a public employee are among such good and sufficient reasons. The aforementioned reasons should not be considered exclusive.”

News outlet Local10 cites Miami-Dade Fire Rescue sources as saying Beckmann has been questioned for several hours, though the details of those conversations have not been made public.